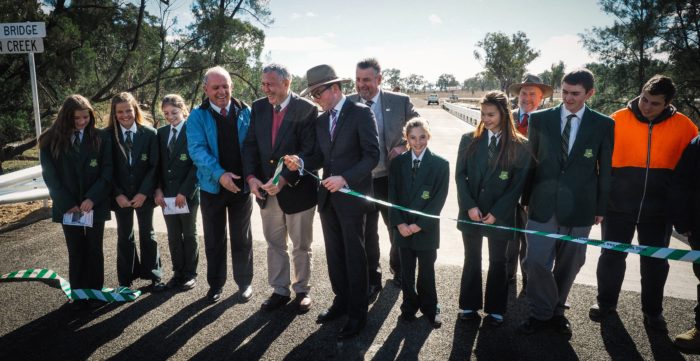 THE last freight pinch-point in the Northern Tablelands section of Thunderbolts Way disappeared today with the opening of the new dual-lane Abington Bridge by NSW Roads and Freight Minister Duncan Gay and Senator John Williams.

The original one-lane wooden bridge has carried traffic over Abington Creek for 92 years, local State MP Adam Marshall said, but a lot has changed in the century since the timber bridge was state-of-the-art.

“Road transport has grown bigger and faster, and that meant that the old bridge had to be load- and speed-limited to modern traffic,” Mr Marshall said at today’s opening of the new bridge.

“By jointly pitching in for the $1.45 million cost of a new bridge, the State and Federal governments, and Uralla Shire Council, have erased the last barrier to the free flow of traffic along the stretch of Thunderbolts Way that runs through my electorate.”

The old bridge was speed-limited to 45 km/h, and was unable to support heavy and over-width vehicles, forcing heavy transport to detour about 30 kilometres.

The NSW Government contributed $705,000 towards the new Abington Bridge, under its Fixing Country Roads program.

It follows the State’s $3.5 million funding of the $4.2m Emu Crossing Bridge, opened last year, which replaced the 96-year-old Emu Crossing with a dual-lane concrete bridge.

“Thunderbolts Way is a vital tourist and transport route, and the old bridge infrastructure was always something of a burden to Council and a pinch-point for those who travel the route,” Cr Pearce said.

“The new Abington Bridge takes out the last bottleneck on this stretch of Thunderbolts Way, which is fantastic news for residents of Bundarra and Uralla Shire, and neighbouring Shires as well.”

Local grazier and University of New England Chancellor James Harris, owner of the bridge’s namesake property ‘Abington’, is relieved to see the old bridge go because of the potential for accidents on it.

“At night you can hear the trucks coming down from the Bundarra side just piling on their air brakes. People have been caught on the bridge with an oncoming vehicle. It’s very fortunate that there hasn’t been a serious accident.”

“Every two years something has been done to it. Council has to replace beams, or replace flooring, and every six months they come out and tighten bolts. It was a constant job.”

However, Mr Harris observed that one group doesn’t welcome the retirement of the old bridge, and its almost annual inundation by flood.

“The kids on Abington are furious, because it means they can now get to school every day of the year,” he said.