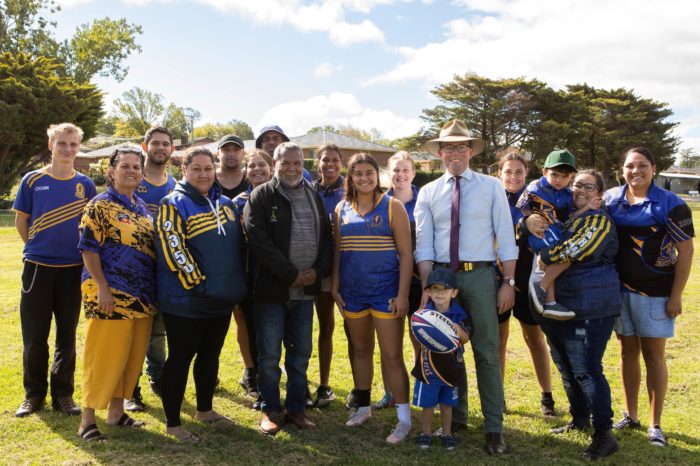 ** Please note the photos were taken well before the new social distancing restrictions due to COVID-19.

NARWAN Rugby League has marked the start of the 2020 season with a victory, courtesy of a $210,715 State Government grant to improve amenities at Newling Oval, for all sports, announced today by Northern Tablelands MP Adam Marshall.

Mr Marshall said every footy team deserved to have a home ground where it’s proud to train and play and its supporters can cheer on in comfort.

“Since its return to Group 19 Rugby League in 2017, the Narwan Eels have worked with Armidale Regional Council to improve the playing standard of Newling Oval,” Mr Marshall said.

“This grant will take that effort to the next level by constructing new home and away dressing sheds alongside the field, which also have space for the referees to change and prepare for matches.

“A big issue for the club in the past has been a loss of gate takings, with people coming onto the grounds and watching matches for free.

“During this season a security fence will be built around the field and along Kentucky Street, meaning patrons will have to access games through the main entrance.

“These are improvements which will benefit more than just the rugby league community, with archery and junior and senior cricket also played at the grounds.

“I congratulate Lisa Waters and her team on the successful grant application which will transform Newling Oval into a facility for the entire community.”

“Over the past three years we have managed to get our club membership up to 70 people, with the committee working hard to ensure we have the facilities to cater for that number,” Ms Waters said.

“We are a very small team which prides itself on being open and inclusive. This funding will allow us to expand existing amenities and build an accessible toilet block for use by the elderly and people living with a disability.

“This grant kicks off a long-term improvement strategy of our club. The next stage will be to upgrade canteen facilities, construct a grandstand and improve parking so our spectators are able to get up close and watch the game from their car in the cold winter months.”