TWO INVERELL JUSTICES OF THE PEACE RECOGNISED FOR 50 YEARS SERVICE 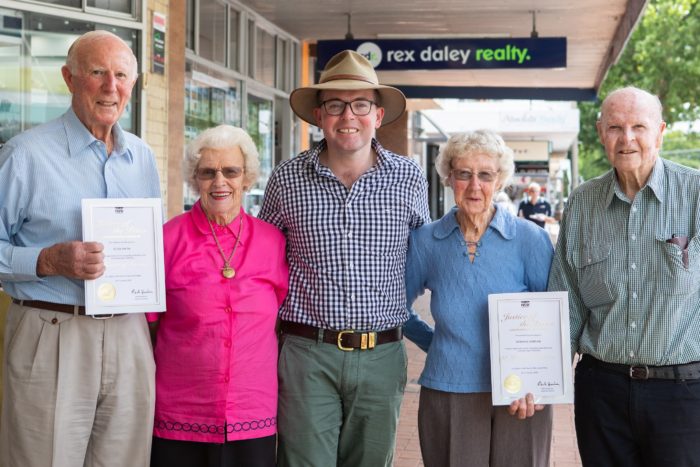 NORTHERN Tablelands MP Adam Marshall has today congratulated and recognised Inverell residents Peter Smith and Norm Redman after both men clocked up half centuries serving the community as NSW Justices of the Peace (JP).

Mr Marshall presented both men with certificates signed by NSW Attorney General, marking their 50 year milestones with a morning tea at Freckles Café in Inverell.

“It’s very rare these days to find anyone in the community who can dedicate 10 years of service to an organisation or cause let alone five decades,” Mr Marshall said.

“Peter, who was a successful pharmacist at Windsor down in the Hawkesbury, decided to became a JP in 1970 after being constantly asked if there was one who operated out of his chemist.

“Peter and his sprightly wife Bunny are very well known and respected in the Inverell community, having raised their family in the area.

“He told me in 50 years there is very little which has changed in the way of demands on a JP’s time however having to update his registration online every five years can be a real pain.”

JPs are very hardworking men and women who have an invaluable role in our legal process, ensuring documents and testimonies can be relied upon.

Mr Marshall said similar to Peter, Norm also became a JP as a result of his occupation in a rural area.

“For much of his adult life Norm was an insurance assessor, travelling the New England and North West inspecting crop and property damage caused by severe weather,’ he said.

“During those years Norm noticed there was high demand for a JP by people in many of the communities he visited, however actually finding one wasn’t that easy.

“Norm decided to undertake his registration and become a JP on wheels, something he continues to do well into retirement with the support of his lovely wife Betty.

“Peter and Norm have been a vital part of the Inverell community and I’d encourage young people to follow in their lead and look into becoming a JP.”