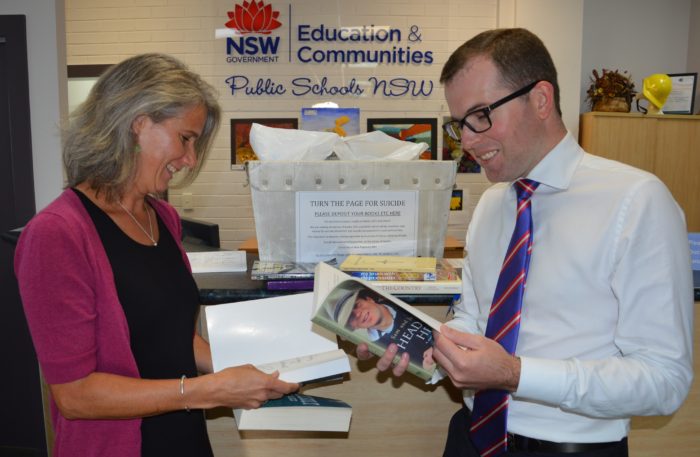 University of New England Associate Professor of Social Work Dr Myf Maple and Northern Tablelands MP Adam Marshall thumbing through some of the books donated for next week’s Turn the Page on Suicide book fair.

NORTHERN Tablelands MP Adam Marshall has thrown his support behind a University of New England academic who, together with her colleagues, is seeking to halve the suicide rate in Australia over the next decade.

Myfanwy Maple, Associate Professor of Social Work at UNE, is one of the nation’s leading researchers on the subject, as well as a Director of Suicide Prevention Australia (SPA) and Chair of the annual National Suicide Prevention Conference.

In August this year, Dr Maple will join a group of eight trekkers on the Larapinta Trail across the West MacDonnell Ranges in Central Australia to raise much needed funds to finance more Aboriginal and Torres Strait Islander delegates to attend the National Suicide Prevention Conference in Canberra in July.

Mr Marshall said that suicide prevention was one of the most challenging problems facing communities in rural and regional Australia and research has shown that the better-informed people are the more likely they are to detect the signs and encourage others to seek help and support.

“Suicide is a difficult issue for our people to discuss and for our communities to confront, but confront it we must,” Mr Marshall said. “We continue to see far too many people in rural and regional areas take their lives.”

“Dr Maple has dedicated her professional career to reducing suicide rates and her organisation’s goal is to halve the number of suicide deaths in Australia within 10 years by ensuring communities and individuals at risk are engaged in the process and informed about the most effective prevention methods.

“There’s not too many more worthy campaigns I can think of and we should all be getting behind this effort.”

Dr Maple, who has already raised more than $3,500 towards her target to fund two delegates to the conference in Canberra, will be holding a two day book fair in the UNE ‘Stro on April 19-20 commencing with an opening reception from UNE Vice-Chancellor, Professor Annabelle Duncan and morning tea.

The book fair event ‘Turn the Page on Suicide’ will be of interest to all avid readers, with books for young and old readers, DVD’s and CD’s – donated generously by the Armidale community.

“I’ve been overwhelmed with donations of books so far,” Dr Maple said. “Suicide is an issue that touches so many people, especially those who care for a loved one struggling to stay alive, as well as for families and friends of those who have died.”

Those wishing to donate books can do so at Mr Marshall’s Rusden Street Electorate Office, New England Mutual’s Armidale branch the regional Department of Education and Communities in Rusden Street, the Armidale hospital social work department

If you would like to make a donation directly to the fundraiser, please visit: https://trek4spa.everydayhero.com/au/MyfMaple