UNIPLAN DOUBLES DOWN ON ARMIDALE WITH HUGE $2M EXPANSION PLANS 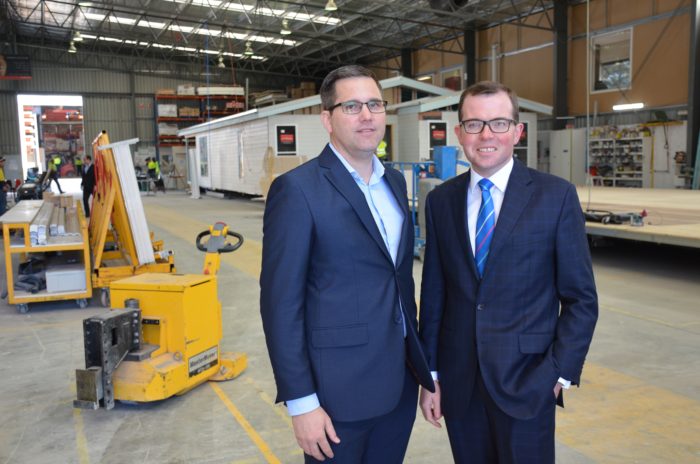 MAJOR Armidale homebuilder Uniplan will virtually double their factory, in a $2 million announcement that will create up to 40 new jobs and put aside years of uncertainty over the group’s future in town.

Member for Northern Tablelands Adam Marshall today joined Uniplan co-founder Ben Scott with the company’s 100 employees in celebrating the announcement, which has been made possible with the acquisition of NSW Crown Land.

An overjoyed Mr Marshall said the NSW Government was contributing $140,000 over two years to facilitate the expansion, helping to drive employment and adding millions of dollars into the local economy.

“This is a stamp of approval on Armidale as a manufacturing and business hub,” Mr Marshall said.

“The $2 million expansion will boost Uniplan’s factory floor space by 80 per cent to 6,300m2, providing not only a significant injection of capital during the construction phase, but employing up to 40 more locals.

“This is a great turnaround from just a few months ago – when Uniplan Group was considering leaving Armidale due to a lack of accessible land.

“This would have had a huge impact on our local economy but the company, Armidale Regional Council and I have been working hard to secure additional space to grow.

“We’re also helping out with $140,000 in state funding to boost local employment – because that two year investment will pay dividends to the community for decades to come.

“I couldn’t have asked for a better result than today’s announcement.”

Uniplan Co-Founder and Managing Director Ben Scott said that after previous expansions – the business was physically unable to expand.

“After our expansion in 2014 we were essentially landlocked – and we’ve been trying to acquire more land for 5 years,” Mr Scott said.

“We’ve been working with Adam for some time to accelerate the land purchase. It was bureaucracy and red tape, which is a slow process and representations from Adam to the Minister and Crown Lands enabled us to pass on the urgency of our case. The certainty will help tremendously from a strategic and growth point of view.”

Mr Scott said that the decision to remain in Armidale was a victory after years of uncertainty.

“Armidale is a fantastic city – we love it, but we could do with a few more economic drivers that help the town to meet its potential. This major investment in industry will help the town grow,” Mr Scott said.

Mr Marshall thanked Uniplan for its continued commitment to Armidale since its inception in 1999.

“Uniplan is one of the town’s great success stories – when I toured the factory with then Treasurer Gladys Berejiklian in 2015, she was incredibly impressed with the enterprise and its contribution to Armidale’s local economy,” Mr Marshall said.

“There aren’t many businesses that can get you a house in just hours – and I’m proud to highlight Uniplan as one of the region’s quietest overachievers.”