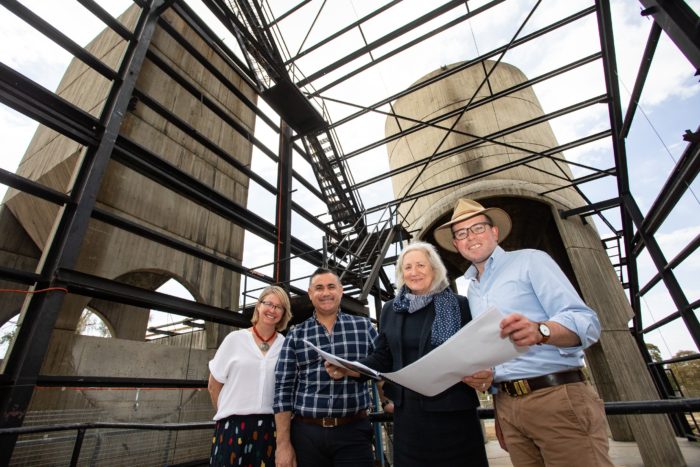 DEVELOPMENT of the University of New England’s ambitious $15.25 million Boilerhouse Discovery Space is steaming ahead, with Northern Tablelands MP Adam Marshall today announcing Expressions of Interest (EOI) were being sought for architects to design the revolutionary education centre.

The State Government has contributed $6.128 million to the ambitious project, with a multi-million dollar donation also put forward from the Abbott Foundation and other supporters.

Mr Marshall said the Boilerhouse project would be the region’s next big tourist drawcard.

“For the past two decades the decommissioned boilerhouse has laid dormant, just waiting for an innovative idea like this to come along and reignite its fire,” he said.

“Rather than bulldoze a classic industrial space which is an important part of UNE’s early history, it will be converted in to a world-class facility specialising in early learning programs and activities around Science, Technology, Engineering, Arts and Maths (STEAM) subjects.

“This facility will enhance Armidale’s standing as an education destination, bringing economic benefits to the entire area.

“With its distinct industrial look and soaring concrete chimney I think this is a project which architects will leap at the opportunity to be involved with, and I look forward to seeing what innovative designs and ideas are put forward.”

UNE Vice-Chancellor and CEO Brigid Heywood said the successful tenderer would be part of an iconic project which will change the face of education in northern NSW.

“We will only ever have one decommissioned boilerhouse and we aim to create something new from it that will help define not just UNE, but the region,” Professor Heywood said.

“We have one shot at converting this structure into an educational space that will shape learning and memories for decades to come, and we are looking for exceptional partners to help us realise this vision.”

UNE Discovery Program Leader Dr Kirsti Abbott said the University’s ambition was to transform the Modern Industrial Age boilerhouse into a playful discovery space aimed especially at children up to 12 years old and their families and friends.

“The design UNE is looking for will combine the best of current educational practices, pedagogy and play, incorporating current and emerging technologies into an architecturally expressive structure,” Dr Abbott said.

“We don’t want a static museum with displays behind glass, nor a traditional playground. Experiences and playscapes within the Boilerhouse will be themed – think of a giant brain, an energy generator or an underground ecosystem – and designed for flexible, self-directed learning opportunities for all visitors.

“It will be an all-weather, all-day playspace that is also a gathering, meeting, party and event space for the New England region.”

UNE has released EOI documentation for firms wishing to register their interest in becoming the Primary Design Consultant for the University’s Boilerhouse Discovery Project.

The Boilerhouse is to be designed in way that retains and highlights the industrial history of the building, incorporating a STEAMpunk theme.

The facility shall therefore be open and flexible, the activities space shall be a safe, secure and exciting environment for children and families to share experiences and time together.

The building will contain learning experiences that are both internal, external and a combination of both. The building shall contain adaptive spaces for teaching, conferences and meetings.

UNE undertook extensive rehabilitation of the boilerhouse site in 2019, including removal of all hazardous material.

Businesses wishing to submit an EOI can do so online at www.tenderlink.com/une

Images of the boilerhouse can be downloaded from www.une.aws-sydney.thirdlight.com/link/1842x4bdu6qf-tksut