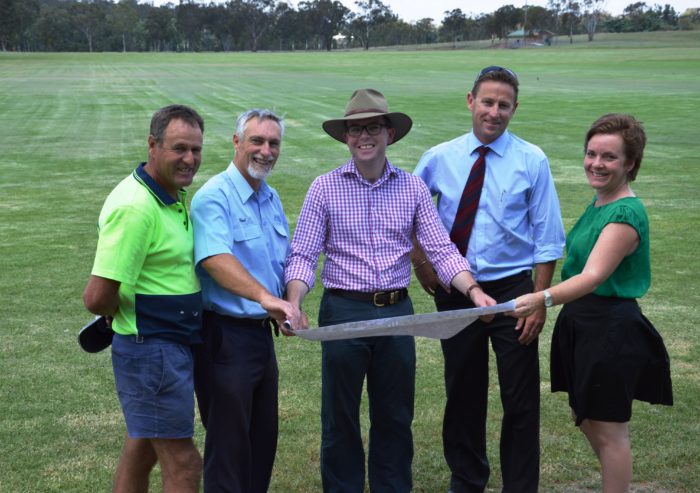 Mr Marshall said Inverell Shire Council had lodged an application for $930,000 from the government’s ClubGRANTS Category 3 program for the $1.18 million project which would upgrade the park’s infrastructure and add new amenities.

“The largest user group, the soccer association, is expanding quickly, doubling its numbers in the past five years. The Mini World Cup this year attracted 50 local, interstate and international teams to the week-long event and next year organisers plan to make it even bigger.

“Inverell Shire Council recognises the need to ensure the community has access to playing fields and infrastructure that adequately caters for their needs and once again I commend them for their proactive approach and their push for this funding.”

Mr Marshall said Inverell’s application was one of only 35 from across the state to make it through the Expression of Interest (EOI) stage, from a field of 413 initial applicants. Council will now submit a more detailed full application.

“The project will include an upgrade to irrigation and drainage at the 21 hectare complex as well as the installation of lighting on the soccer fields and netball courts,” Mr Marshall said.

“Council intends building a club house that will cater to all groups; the complex is also used by schools for their cross country events and the addition of a track and field facility will be welcomed by local schools and Inverell Little Athletics.

“Providing lighting to the playing fields will be another welcome feature as training for many of these sports is after hours.

“Additionally, junior hockey is a growing sport in Inverell with a membership of over 100 players now registered so there is real need to meet that demand and allow the grounds to be used after dark.

“A grandstand will also be an added feature, with a capacity to seat 500 people.”

Inverell Shire Mayor Paul Harmon said Inverell Sports Complex was an important community asset and council was very keen to upgrade the facilities and cater adequately for the growing numbers using the grounds.

“This is an important project for Inverell and will accommodate our fast growing sporting community for many years to come,” Cr Harmon said.

“We appreciate Mr Marshall’s support and hope the merit of the project is appreciated by those assessing our request for funding.”