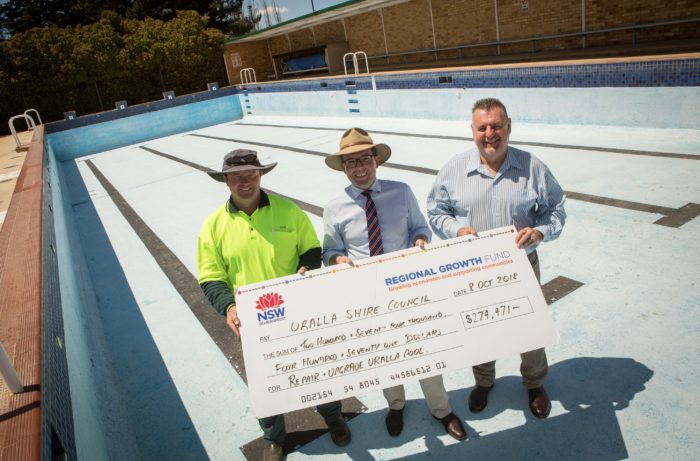 The Uralla swimming pool will get a new lease on life with a $274,471 splash of cash from the NSW Government, Northern Tablelands MP Adam Marshall announced today.

Mr Marshall was in Uralla yesterday with Uralla Shire Mayor Mick Pearce and pool manager Martin Williams to deliver news of the water windfall that will see repairs and a major upgrade to the pool lining that will extend its life by another 25 years.

“And importantly, there will be other major improvements that will enhance the pool grounds that will make them even more attractive for users,” Mr Marshall said.

The council says the works will get underway as soon as possible, including the pool lining upgrade, although there’s not enough time to get it done before the new swim season starts on October 20, so it will have to wait until the winter recess.

“The pool has been here since about 1966 and is fairly well utilised so these works will give us another 25 years,” Cr Pearce said.

“We’ll also get new roofed trestle tables and some external new fencing which is a bit how’s-your-father, and a shelter over the toddlers’ pool and other shade shelters.”

The pool is due to reopen for the new swim season from October 20. Pool manager Martin Williams has told media the new lining will extend the life of the pool.

“We get anywhere from 7,000 to 13,000 people through the turnstiles every year and we have quite a few parties held here,” Mr Williams said.

A new barbecue will add to those functions in the pool grounds.

Mr Marshall said the pool project funding was part of an overall total of more than $720,000 announced for Uralla sporting improvements in three slabs this week from round two of the NSW Stronger Country Communities Fund.

“It’s not as if these projects have fallen out of the sky, they have been worked on years for years by council and community and sporting groups,” Mr Marshall said.

“But it is always enjoyable when you’re able to add the final ingredient, which is the cash to makes these dreams a reality.”

Cr Pearce has described the funding grants as fantastic news for the Uralla community.

“It’s a great hunk of money and it will be well utilised,” he said.

“We will keep putting our hand up and hopefully the government will keep giving us more money.”