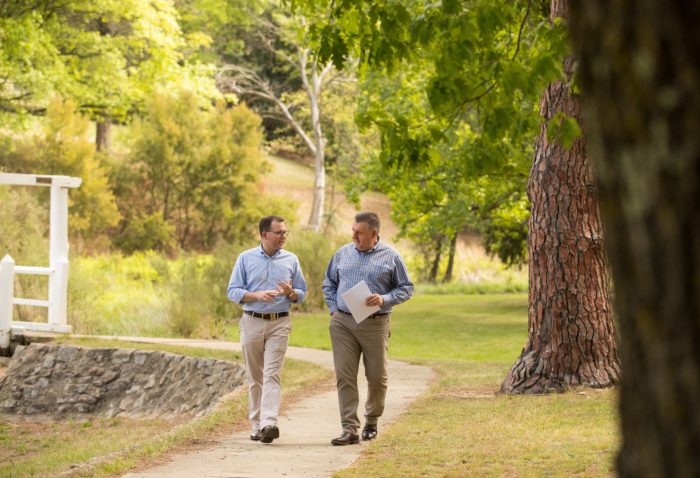 NORTHERN Tablelands MP Adam Marshall has unveiled plans for a double barreled project that will see large upgrades to seven parks across the Uralla Shire as well as some significant works on three popular walking pathways and tracks.

Mr Marshall joined Uralla Shire Mayor Mick Pearce earlier this week to announce a $571,000 grant from the NSW Government to fund the ambitious plans to enhance community spaces across the district.

Mr Marshall said council had initiated the plans after consultation session with the local community, which will see parks and open spaces in every village and hamlet in the Shire upgraded. Council has also chipped in $80,000 to the works.

“This is a great day for all our big and small communities across the shire,” Cr Pearce said.

“The parks and pathways projects are not Uralla-centric, the funding is being shared in our villages and I am very happy to see this spread.

“We went out to all our people in those villages to talk to them about what they wanted and through our Open Space Strategy surveys we did consultation and that info has fed into the strategy.”

Mr Marshall said that under that plan, seven parks would be upgraded, including Hampton Park, the BMX bike track, Pioneer Park, Penelope Park at Invergowrie, a nature reserve in Bundarra and play areas in Kentucky and Kingstown.

“They will get an update to some of the play equipment in those places, new soft fall and a revamp and polish up with the $284,426 in government funds,” Mr Marshall said.

Under the NSW Stronger Country Communities funding, $207,000 has been allocated towards three pathways projects, including building a new one, the Goldfields track at Rocky River.

Mr Marshall said the Goldfields track was designed to create a walking path through some historic goldfields mining areas.

“There’s a lot of history there, but there’s plenty of open holes from the diggings, so this work will open up some of that area to the public to explore,” he said.

A two-kilometre undeveloped walking path at Invergowrie, where there are no footpaths for local foot traffic and recreational walks, will be built while the well-known Mount Mutton path at Uralla, which starts from Alma Park in the centre of town, will also be upgraded.

“These two projects will be a huge boost for recreational users and walkers, both young and old, but also for visitors and tourists who like to explore, and the park upgrades particularly will give young children a better playing space,” Mr Marshall said.