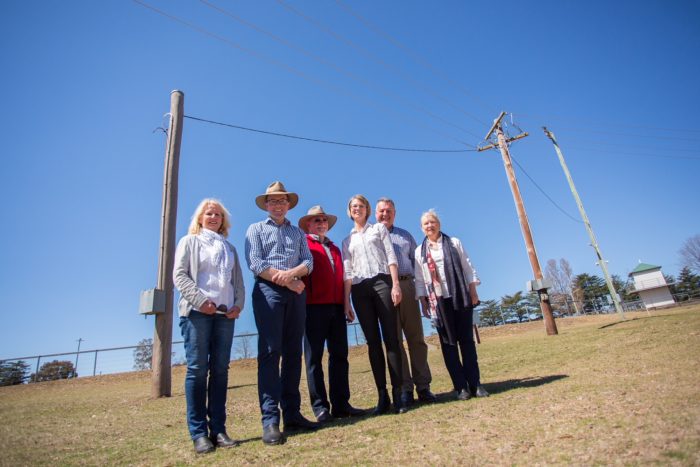 THE newly-appointed Uralla Showground Trust is celebrating a win for users with a $40,450 funding boost from the NSW Government to bury some powerlines on the main arena, according to Northern Tablelands MP Adam Marshall.

Mr Marshall has announced the grant for the showground reserve trust which will see them relocate and upgrade the existing dangerously low overhead power lines underground.

“The Trust is made up of five members appointed less than two months ago and they’re enthusiastic and committed to rejuvenating the local showground, which is a landmark site in Uralla and at the heart of a lot of community events,” Mr Marshall said.

“So, it’s exciting for them to get a leg up early on and I’m just as excited to be able to support that energy and drive first up.”

Trust chair Leanne Doran said the grant funds were an important indicator that the Trust was there to get in and make improvements for the good of the venue.

“The Uralla community will be able to really see that we are making improvements early in our tenure, that we can do the work to develop the showgrounds,” Ms Doran said.

She said the plans included taking out about two power poles and putting those lines underground.

“When the Uralla show is held there it’s right where the rides usually go and normally you have to configure them in a certain way because of that.

“We will be able to have a much better set-up. And it’s where the horse events and cross country events are held, and with some riders on horses going over jumps they can come pretty close to the lines, so it’s a safety issue too.”

Mr Marshall said the funding might also stretch to allowing some improvements to be made to the poultry pavilion which currently had only half the shed lined and half with floating floor – but under the project they might be able to finish that job.

Ms Doran said the Trust would now investigate quotes for the work in consultation with the Lands Department and have the works completed in time for the next Uralla Show in February.

“It’s terribly exciting and we’re just thrilled with the funding and as soon as we get the quotes we can get underway. We certainly won’t be resting on our laurels. We are focused and motivated and we are all there for the same purpose,” Ms Doran said.

Mr Marshall said the Uralla funding was through the NSW Government’s Crown Reserves Improvement Fund and was one of 22 projects in his Northern Tablelands electorate to share in some $700,000 under this program.

“It is a funding program that really supports the hard work of local groups and brings tangible benefits to local people who see their showground as a central place for so many different community events and activities,” Mr Marshall said.

“By adding to the infrastructure we maintain that historic connection and also ensure it continues to meet the requirements for future use.”