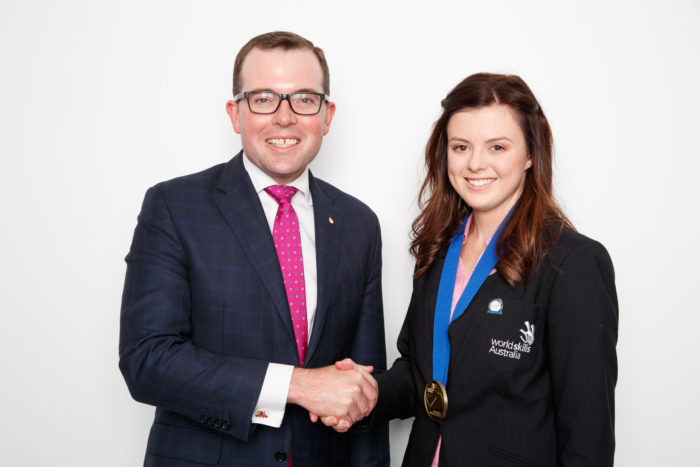 LOCAL hairdressing student Courtney Baldwin has proven she is the best in the business across Australia this week, taking out the Gold medal at the WorldSkills Australia 2018 National Championships in Sydney.

A TAFE NSW student from Uralla, Courtney took out the prestigious gold award after competing in the hairdressing category of Australia’s largest skills competition hosted at the International Convention Centre over the last three days.

“It was a fantastic learning experience, working under pressure against some of the best hairdressers in the competition has really made me stronger,” Courtney said.

“To win the gold medal was an amazing result.”

Courtney is currently undertaking an apprenticeship at Cooper & Co Hairdressing in Armidale while completing studies at TAFE.

Member for Northern Tablelands and Minister responsible for TAFE Adam Marshall joined Courtney at the closing ceremony of the championships last night, where she was awarded her medal.

Mr Marshall said he was thrilled to see a local student excelling on the national stage.

“Courtney’s immense talent has taken her all the way to gold on the national stage and I cannot wait to see what she achieves when she takes her hairdressing skills to Russia for the international competition next year,” Mr Marshall said.

“TAFE students are in high demand because of the quality of their education and ability to hit the ground running with relevant and practical skills and Courtney’s success is a clear demonstration of that.

“This win is a huge coup for Courtney and our region. Courtney’s done herself, her family and her employer incredibly proud, proving she is the cream of the hairdressing crop in the whole country.

“TAFE students winning these awards demonstrate what is on offer for students if they choose a VET based education.

“Congratulations to Courtney and I look forward to seeing even more students from our region recognised for their achievements in the future.”

Courtney’s win has secured her a place on the Australian Skillaroos team to compete with the world’s best at the 45th WorldSkills International Competition finals, to be held in Kazran, Russia, next year.