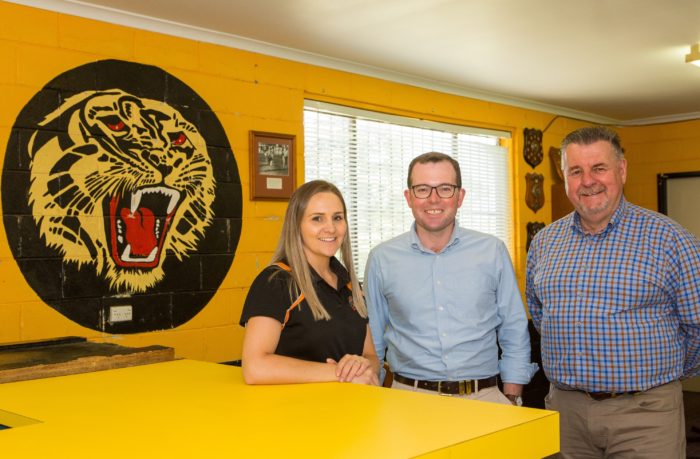 Mr Marshall was in Uralla yesterday with Tigers Club project co-ordinator Abby Smith and Mayor Mick Pearce to announce just how the funding would cover more ground than just for footy games.

“Uralla’s a proud rugby league town and the Tigers are hometown heroes when it comes to sport but they’re also vitally concerned with extending their reach to give more to their community than just footy games,” Mr Marshall said.

“They see their home ground at Woodville Oval as a community asset that can be used and enjoyed by all sports fans and social groups and they’re putting the building blocks in place to do that.”

The funding will be used to add a disabled access toilet to the existing clubhouse, in addition to ripping out and replacing the entire interior of the existing kitchen, bar and lounge area. This will provide a more modern and comfortable facility for spectators.

Mrs Smith said the clubhouse would undergo a major structural renovation thanks to the NSW Stronger Country Communities Fund.

“The clubhouse is 38 years old and looks it, so there’s some huge work to be done,” Mrs Smith said.

“We’ll be ripping out a lot in those areas so we basically get a brand new interior and new function areas.

“We can open up new avenues by having updated facilities, it can be hired out and it can be used for community events, by schools and other sporting clubs too, not just for rugby league. We’d like to get a touch comp going in summer, things like that.”

The Uralla Tigers were minor premiers in this year’s Group 19 second division, but were beaten out of a grand final berth in the preliminary final, while their women’s league tag side took out the inaugural premiership decider in that competition.

Mr Marshall said the club owned the grounds and the project would considerably upgrade outdated amenities, including building a brand new toilet addition for wheelchair and disabled users.

Mrs Smith said the kitchen would get commercial stainless steel benches, new roller door shutters on the canteen section, new bar facilities including above-counter bar fridges, a new TV system to livestream the outdoor game inside for the comfort or older and younger fans in a cold Uralla winter.

“We’ve got a working bee coming up to do the clean up and get things ready for the structural start, and we hope that’s as soon as possible,” Mrs Smith said.

“It will take a lot of time to organise everything but we’d hope to have the main areas up and running for the new footy season.”