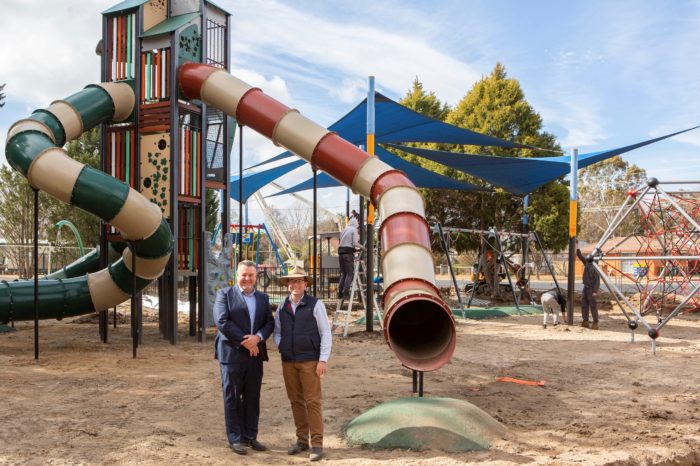 THE imaginations of children from across the Uralla Shire and further afield will soon be running wild in Alma Park, with a new multi-story playground almost complete and towering over the town.

Northern Tablelands MP Adam Marshall went for a slide down the new slippery dip with Mayor Mick Pearce recently, testing out the playground, which is being funded as part of a $571,000 State Government grant to upgrade parks and paths across the district.

Mr Marshall said council had successfully built an attraction which would not only give local children a place to play but would encourage visitors to stop, take a break and spend money in town.

“You can’t underestimate the economic value a good playground can bring to a community,” Mr Marshall said.

“What has been created in Uralla is a friendly and inviting public space where travelers can pull into, the kids can run around and is within walking distance of Uralla’s CBD where they can buy lunch and do some shopping.

“I’m really pleased this funding is also being utilised in other communities around Uralla Shire, with seven parks, including Hampton Park, the BMX bike track, Pioneer Park, Penelope Park at Invergowrie, a nature reserve in Bundarra and play areas in Kentucky and Kingstown, also receiving a facelift.

“I look forward to seeing Alma Park teeming with kids once it is officially opened in September.”

Since it was started the, the NSW Stronger Country Communities Fund (SCCF) has seen the State Government support seven projects in the Uralla Shire, worth a total of $1,527,171.

Round 3 SCCF applications are now open and Mr Marshall is urging local community groups to apply.

“Uralla Shire has been allocated $777,856 in Round 3 and I want to see every cent of that money put into projects which improve the lives of people in the community,” he said.

Applications close on Friday, 27 September 2019. For more information and to apply, visit www.nsw.gov.au/SCCF