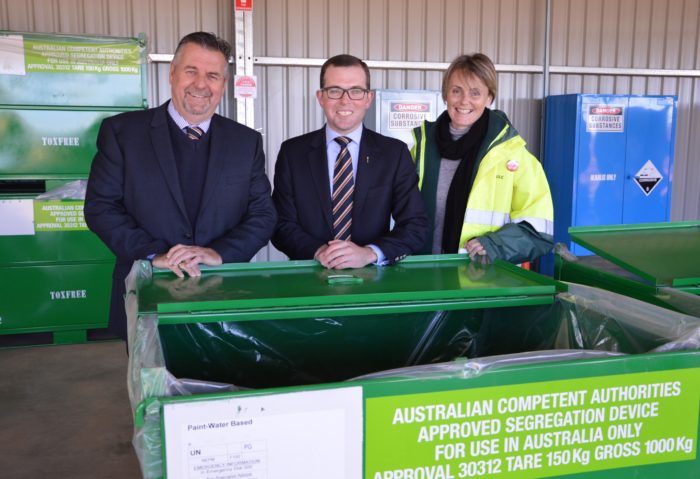 RECYCLING and the environment in Uralla Shire has been given a huge boost today with the official opening of the new Uralla Community Recycling Centre by Member for Northern Tablelands Adam Marshall and Mayor Michael Pearce.

The construction of the centre followed a grant of almost $103,000 from the State Government last year to Uralla Shire Council through the NSW Environment Protection Authority’s (EPA) Waste Less, Recycle More initiative.

“The new Community Recycling Centre is a great asset to Uralla as the community now has a facility for the safe disposal of problem wastes open all year round,” he said.

“With residents now having a new service to keep household problem waste out of kerbside bins the community will be able to reduce the amount of environmentally hazardous and recyclable materials that end up as landfill.”

Mr Marshall said this was the third grant Uralla Shire Council had received from the Waste Less, Recycle More initiative, with other projects investing in public waste bins and the promotion of the ‘Hey Tosser’ anti-littering campaign throughout the Shire.

“Uralla Shire Council and the community has a strong track record of taking waste reduction seriously and caring for the environment. I congratulate them again for their initiative with this recycling centre – with a growing reputation in this area it’s no wonder Uralla was chosen as the pilot for Australia’s first Zero Net Energy Town (ZNET),” he said.

Mayor Michael Pearce said council was committed to improving recycling and waste services for residents and that the new facility would provide a year-round, convenient solution for recycling and safely disposing problem wastes.

“With the introduction of a second service, we can now better manage problem wastes for the benefit of Uralla resident’s health and our environment,” Cr Pearce said.

“Uralla residents have always been willing to embrace new, smarter ways to manage their waste, and I’m sure this new Community Recycling Centre will be no exception.”

Located off Rowan Avenue, on Tip Road, the Uralla Landfill and Community Recycling Centre will be open from 8am to 4pm on Monday, Tuesday, Thursday and Friday and from 9am to 2pm on weekends.

Mr Marshall said Uralla’s new Communtiy Recycling Centre was one of a network of 86 centres being built around NSW with funding awarded by NSW EPA in partnership with the Environmental Trust.