URALLA’S CONSTELLATIONS OF THE SOUTH SPARKLE WITH SUPPORT 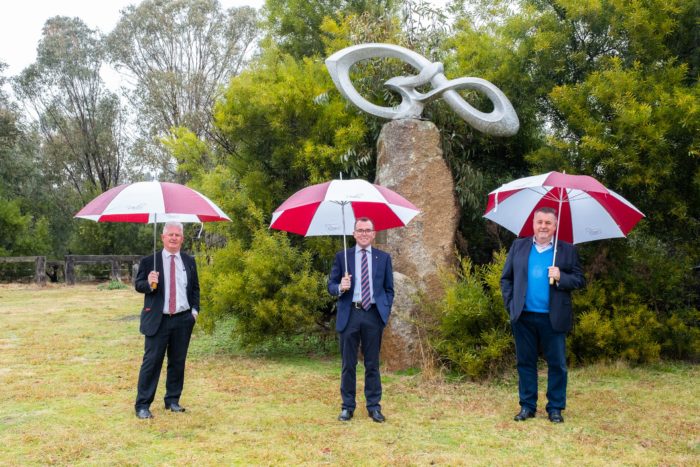 The sky is the limit for the parkland known as ‘The Glen’ at Uralla, with Uralla Shire Council Director Infrastructure and Development Terry Seymour, left, Northern Tablelands MP Adam Marshall and Mayor Michael Pearce welcoming the approval of the Constellations of the South sculpture project for funding under the NSW Government’s Public Spaces Legacy Program

TELESCOPES will no longer be required to take in the night sky at Uralla, with Northern Tablelands MP Adam Marshall recently announcing funds from the NSW Government’s Public Spaces Legacy Program would be used to complete the Constellations of South sculpture project at The Glen.

Mr Marshall said it’s fitting that one of Uralla’s hidden gems, The Glen, would soon sparkle like the clear night sky the region is famous for.

“Located on northern entry to Uralla, The Glen is a 10 hectare area of parkland which is mainly utilised by locals,” Mr Marshall said.

“What many people don’t know is that in 2004 two impressive boulders were stood in The Glen, each adorned with a sculpture representing either the Southern Cross or constellation Carina.

“Almost 20 years later and a further six sculptures will be added to the park. Installed in an arc around a 19 metre high stainless steel obelisk, they will be positioned to point to their specific constellation in the sky.

“To compliment the sculptures, a new lake will also be constructed where people can sail model boats.

“The Glen is a well of untapped potential. I look forward to driving past in future and seeing the area full of people taking in the spectacular sculptures and enjoying the parkland.”

Uralla Shire Mayor Michael Pearce said The Glen had long been a place of recreation for people wanting to exercise and spend time outdoors.

“The funding will bring out the best in The Glen, really stepping it up as a recreation space for the community, at a key entrance to Uralla,” Cr Pearce said.

“To encourage community engagement with the area new picnic shelters, seating and park furniture will be installed.

“Accessibility improvements will also be made with new public toilets, signage, parking, and landscaping.

“Council and the community began work together on the first part of the Constellations of the South installation in 2004.

“It’s going to be very exciting to see this project to fruition.”