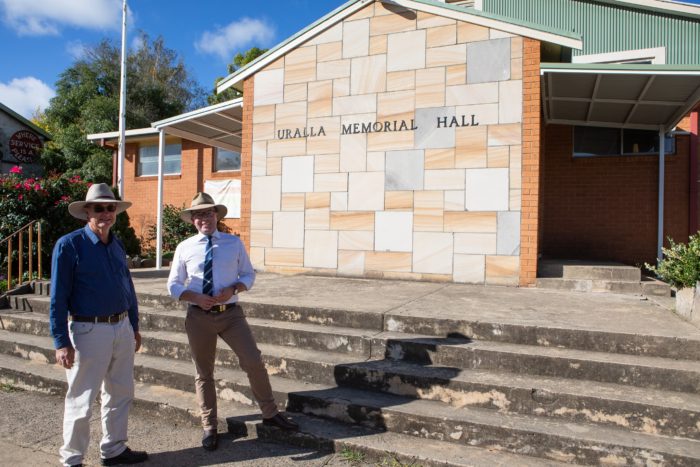 ONE of Uralla’s main public meeting places is about to receive a much-needed facelift with Northern Tablelands MP Adam Marshall today announcing a $103,180 State Government grant to repaint and improve access at the historic Uralla Memorial Hall.

Mr Marshall said the refurbishment would improve conditions for the many groups and charitable organisations which utilised the facility.

“When the Uralla Diggers League announced in 1954 its plans to build a Memorial Hall, adjoining the old mill, the Uralla Times reported the decision as ‘a big thing’ which would ‘have the full support of the entire community’,” Mr Marshall said.

“Almost 70 years on, the hall is still serving the community, however Uralla Shire Council has identified a number of structural improvements which need to be made to make the building more welcoming and comfortable for users.

“Climate control in the main hall will be improved with the grant replacing 22 of the Memorial Hall’s original windows, keeping it warm in winter and cool in summer.

“The building’s internal walls and ceiling will also receive a fresh coat of paint while the aged carpet in the Gostwier Room will be replaced to make the space more inviting as a public meeting venue.

“Finally, to improve access to the main hall, work will be undertaken on the entrance way floor to making it even and easier for those with limited mobility to walk across.”

“The devastating bushfires much of our region recently experienced has highlighted how important it is for council to have this venue up to operational standard and ready to deal with an influx of people.

“Improvements to the main hall entrance flooring will mean the hall will be able to withstand a high level of foot traffic, as would occur in and emergency, while also improve accessibility for our elderly and more vulnerable.”

The War Memorial gates at Armidale Sportsground will undergo a $2,552 revamp this year, with Northern Tablelands MP Adam... Read More