WARIALDA JOCKEY CLUB ON A WINNER WITH $20,000 FOR TRACK YOUTH EVENT 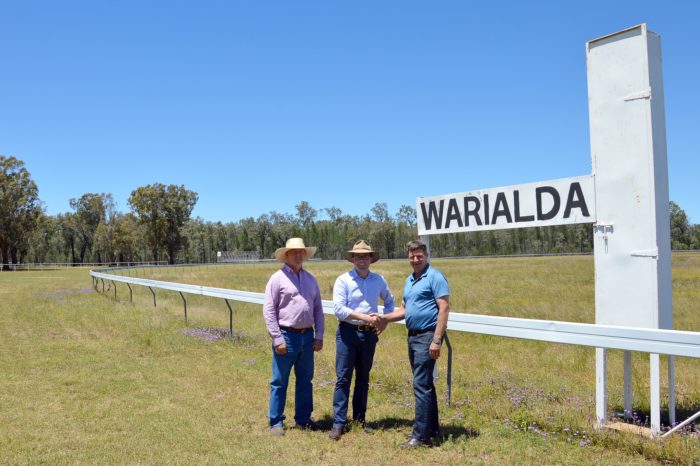 IT only hosts one race day a year but the Warialda Jockey Club is saddling up to hold a big new event to raise awareness of youth mental health issues, according to Northern Tablelands MP Adam Marshall.

Mr Marshall today announced that the club had secured a $20,000 purse from the NSW Government’s new Back to the Track program to hold a dedicated youth day next year at the track that will feature bands, music, poetry and fireworks.

He said the new program, which was designed to support country racing clubs to engage with local their communities, was a winner for the small Warialda club.

“The jockey club saw this new funding program and jumped at it,” Mr Marshall said. “It’s a real credit to the committee that they’ve come up with this idea of supporting local young people struggling with mental health issues.”

Warialda Jockey Club Secretary/Treasurer Peter Hancock said while many country clubs were made up of ageing executives, they’d identified succession planning and attracting younger members and followers as vital for the club’s survival.

“We’re ageing but progressive and we do have one young bloke in his 20s or so on our committee,” Mr Hancock said.

The idea for the big band and musical day was a testament to that youngest committeeman, Rhys Aleckson, and his sporting prowess and appreciation, and the club’s older committee members had weighed in with some interest in adding poetry to the event lineup.

Mr Marshall said while the finer details of the thoroughbred event had to be worked out including some big name guest performers, there’d been almost universal agreement that youth mental health would be a focus too.

“The committee is looking at having some local musical talent but also poetry recitals, even a poetry challenge with some prizemoney and perhaps a musical camp and poetry writing workshop as well as a fireworks display,” Mr Marshall said.

“The club is looking to have the local community use the race course more often and they’re looking ahead to doing some other upgrades and sourcing funding for that to improve some of the facilities.

“They already host a lot of 18th and 21st birthday parties and the Apex fireworks as well as their big race day in April, but they’re keen to see more functions there, including weddings.

“They’re looking to attracting younger people to their committee and to keep the club viable and building a steady income.

“The event, whether it’s a day to evening or daylight function, will promote the racecourse as a great local venue but hopefully will bring together a wide range of people such as musicians and entertainers, food producers, service clubs and schools.

“This new funding program is all about getting more people visiting and using local racecourses or clubs, because country racing is a key part of the social fabric of our communities and using the facilities more often builds on those key connections.”

The Warialda event was one three across the Northern Tablelands funded under the new State Government initiative.