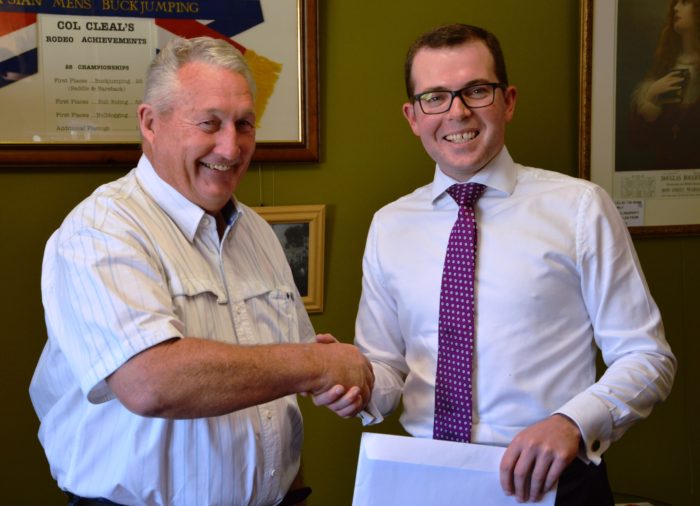 WARIALDA’S P&A Society has received a $2,000 grant from the Premier Mike Baird to assist with the cost of hosting the 2016 National Shearing and Wool Handling Championships, Member for Northern Tablelands Adam Marshall announced today.

“This is a major coup for Warialda and a feather in the show society’s cap and I’m delighted the Premier responded to my request for funding to assist with hosting the three-day event next year,” Mr Marshall said.

“The committee has an excellent track record, having successfully staged the 2009 championships, attracting strong competitor entries along with a large supportive crowd and excellent media coverage.

“Next year’s event promises to be bigger and better and I know Dave and his committee with do a cracking job as hosts again.”

Mr Marshall said the championships would also include a Trans-Tasman Test pitting the best shearers from Australia and New Zealand against each other.

“These championships are nationally and internationally significant and will also serve as selection trials for the Australian team to contest 2017 World Shearing and Wool Handling Championships in Christchurch,” he said.

Mr Marshall said recent improvements to the Warialda Showground would make it a perfect venue to host championships again.

“The condition of the facilities is a credit to the community and the volunteers who put so much time and effort into maintaining them. With the more than $150,000 in funding the last two years the showground’s electricity supply has been completely rewired, a new canteen and arena ring fence built and at present, the trust is working towards repainting their buildings,” he said.

“This is an exciting opportunity for Warialda to once again showcase the beautiful town and district and give the local economy a major boost.”

The championships will be held over three days on the first weekend of October 2016.