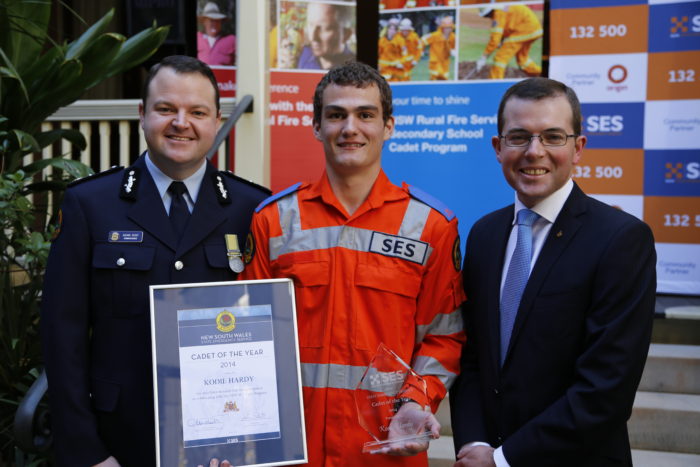 WARIALDA State Emergency Service (SES) member Kodie Hardy has been honoured with the NSW SES Cadet of the Year Award, presented this morning during a ceremony at Parliament House.

In congratulating Kodie on his outstanding achievement, Mr Marshall said he was impressed by the young member’s accomplishments, having only joined the SES around 14 months ago.

“After completing the North West Region Cadet Camp, Kodie went on to join Warialda Unit. He has since become integral part of the service and a great ambassador and role model as he spends time talking to his fellow high school students about his experiences and encourages them to join.

“He has shown a great deal of personal growth throughout this program and has demonstrated a high level of leadership skills. He is known for his abilities to mentor, encourage and support his peers.

“Kodie is an impressive young man and I congratulate him on this wonderful achievement and thank him for his service to the Warialda community.”

Warialda Unit Controller Graham Moxey said Kodie was always eager to be involved in all aspects of the unit.

“Students like Kodie learn and develop invaluable personal and practical emergency management skills through both theory and scenario based training.

“The accredited Cadet trainers are NSW SES volunteers themselves who greatly enjoy sharing their skills, experience and stories.

“Like Kodie many students go on to join their local NSW SES Unit – sometimes drawing in their friends, teachers and parents too.”

The NSW SES Cadet of the Year Award recognises the contribution of a young volunteer between the ages of 16 and 25 who has demonstrated a commitment to learning and activities as a member of a NSW SES Unit or Region.

There are currently around 1,800 volunteers under the age of 25 in the NSW SES.