WARIALDA STUDENT TO REMEMBER THE ANZACS ON WESTERN FRONT 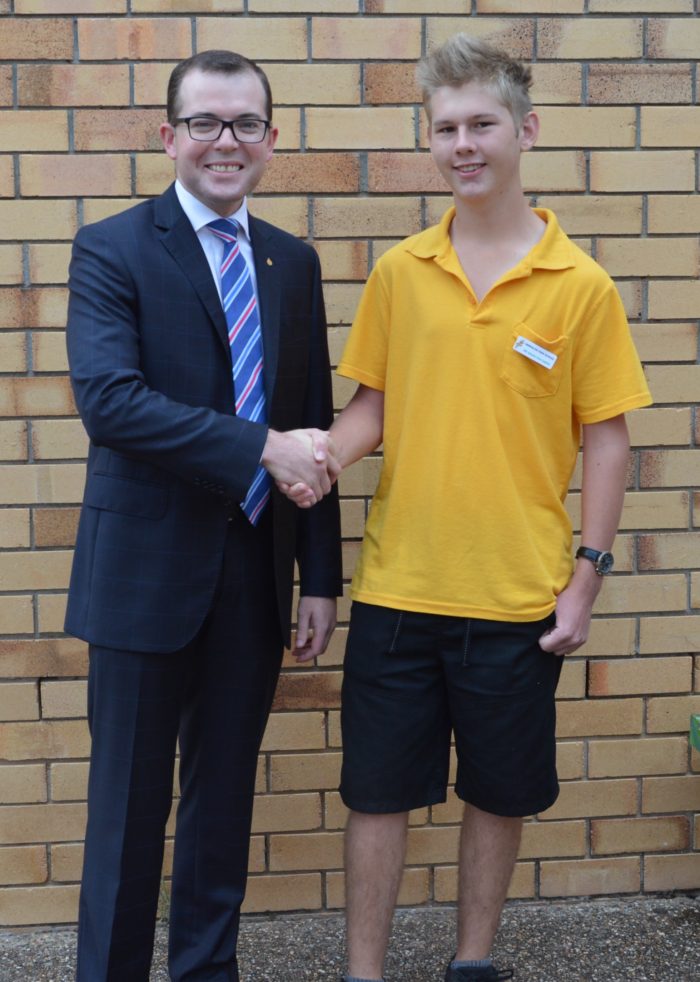 MEMBER for Northern Tablelands Adam Marshall today met and congratulated Warialda High School student Jim Skinner who will be one of 24 outstanding Year 10 and 11 students that will travel to the battlefields and memorial sites of the Western Front later this year as winners of the 2016 Premier’s ANZAC Memorial Scholarship.

Mr Marshall said the Year 10 student and his 23 fellow scholars would travel to France in July and visit the official commemorations of the Battle of Pozières and the Battle of Fromelles, which were the setting for displays of great sacrifice by the ANZACS.

“We’ve recently marked the centenary of the first landing of Australian troops in France as they made their journey to fight in the harrowing three year stalemate on the Western Front,” Mr Marshall said.

“Like those young men who landed on the shores of France a hundred years ago, this also marks the start of our Jim’s great adventure to the Western Front to learn more about the sacrifices and heroism of the ANZACS that continue to shape Australian identity today.”

Mr Marshall said that that the school and local community was extremely proud of Jim.

“It was thrilled to announce Jim’s success in front of the entire school community today and I know it was a proud moment for his mother Ellie, who was also present,” he said.

“To win this scholarship is an incredible achievement for Jim, who is a bright and hardworking student with a keen interest in Australian history, particularly our nation’s involvement in World War I.

“This is a fantastic opportunity for Jim to represent Warialda in the once-in-a-lifetime Centenary of ANZAC commemorations.

“I congratulate Jim on securing one of these prestigious scholarships and wish him well for his exciting adventure.”

The 24 students will be accompanied by three supervising teachers, a tour historian and NSW Returned Services League (RSL) representatives.

Jim will be joined on the trip by another scholarship recipient from Guyra Central School who Mr Marshall will announce and meet tomorrow.