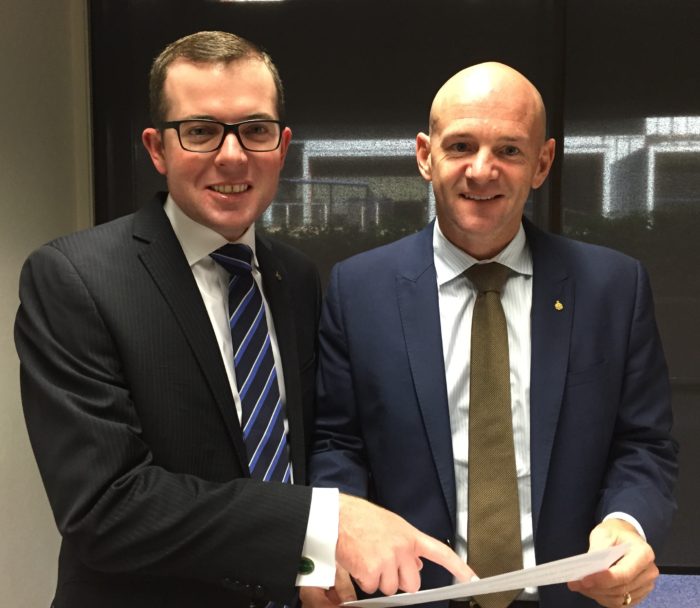 Member for Northern Tablelands Adam Marshall met with Water Minister Niall Blair this week in Parliament to follow up on issues raised during the Minister’s visit to Moree last week and meeting with local irrigators.

Mr Marshall made the comments following a meeting with Water Minister Niall Blair this week in Parliament, a follow-up from the Minister’s visit to Moree last week and discussions with local irrigators and water user groups.

“The Minister for Lands and Water has confirmed to me and on the record in Parliament this week that he is working as quickly as possible to secure the short-term emergency water supply out west,” Mr Marshall said.

“While it will not provide access for Northern Tablelands irrigators to the current flow, which has now passed them by, it will ensure embargoes are never required for this purpose in the future.”

Mr Marshall said the continuing dry conditions was having a huge impact on farmers, especially those in the North West, but that water had to be prioritised for critical human consumption for Broken Hill, where supply was extremely low.

“The Minister travelled to Moree with me last Tuesday and we met with a number of irrigators from across northern NSW to discuss the embargo at length,” he said.

“At the meeting a range of issues were discussed, including the accuracy in the flow forecast, fees and licensing, and works at Menindee that will benefit the northern basin.

“The Minister is currently investigating every issue that was raised at that meeting and has committed to reporting back to me and the irrigators.

“I also confirmed with the Minister that he will also take some of the irrigators’ proposals to the Murray-Darling Basin Ministerial Council meeting in Melbourne this Friday.

“I will continuing pushing the Minister to get the embargo lifted as soon as possible and secure a guarantee we will never see our region’s water taken again and sent downstream to solve water shortages in the far west of the state.”