WATER SOON TO BE ON TAP FOR INVERELL POLOCROSSE CLUB 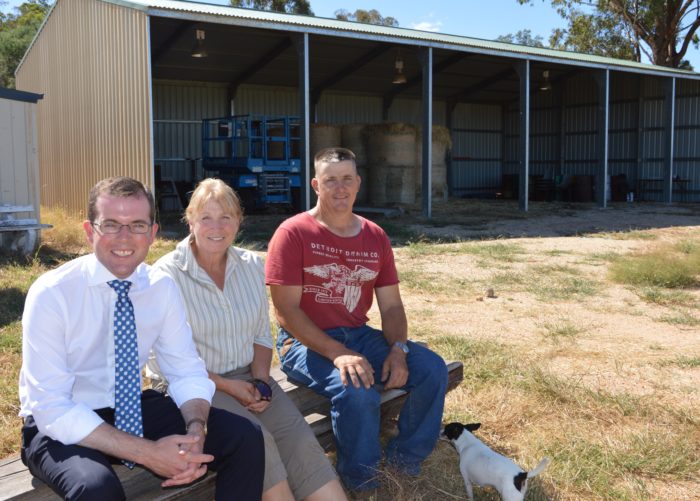 THE Inverell Polocrosse Club will soon be installing its own rain water tank thanks to a $8,436 NSW Government Sport Facility Program grant, according to Northern Tablelands MP Adam Marshall.

Mr Marshall visited the polocrosse grounds last week to deliver the good news to club members and discuss their plans for future improvements to the grounds and facilities.

He said the club would now install a 80,000 litre tank which would ensure an adequate supply of water for the club to run its annual carnival and training days.

“Until now, the club has relied on water piped from the property’s homestead so this is an excellent outcome and I’m delighted the grant will allow them to install this much-needed water storage,” Mr Marshall said.

“The club has made a great deal of improvements on their own by begging and borrowing from all quarters so I’m pleased the government has been able to lend its support to this great local club.

“They’ve managed to relocate a shed that was donated to them by the Stonehenge Sports Club. It wasn’t being used there so it’s good to see it has found a new home and has been put to good use.

“They’ve also built a small canteen which again was donated; they have a very adequate amenities block and five old fashioned donkeys to provide carnival campers with a hot shower at night. They even managed to round a pile of old power poles which provide seating for carnival spectators.

“It’s an excellent set up and I commend the club’s committee on their tenacity and efforts to create a first class facility for the Inverell polocrosse community.

Polocrosse Club secretary Leonie Buchan said the club was delighted to secure the grant and hoped they could get the tank installed before the next rain event.

“At our annual carnival in May we have about 300 to 400 people camping here overnight so we’re really pleased we will now have our own water storage facility,” Ms Buchan said.

“We’ve managed to make lots of improvements here and a lot has come our way from just asking so this is very nice to get this funding to buy exactly what we need.”