WE HAVE OUR DISTRICT COURT JUDGE 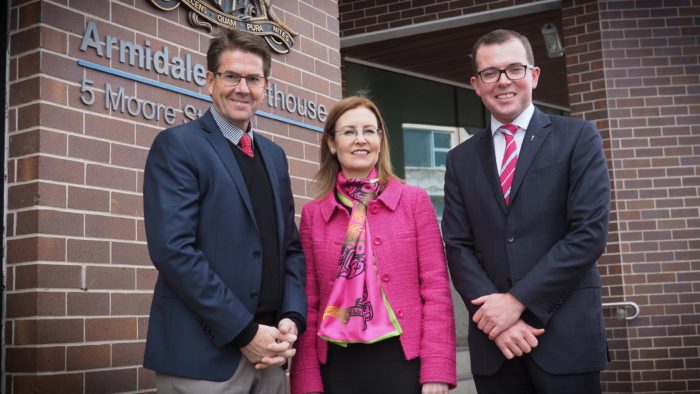 Judges for the Bush campaign a success

THE region is to get its own District Court judge, NSW Attorney General Gabrielle Upton announced in Armidale today.

Visiting the city, Ms Upton said the NSW Government would fund a judge to live in the region and preside over the Armidale and Tamworth District Courts.

The history-making news was warmly welcomed by local MP Adam Marshall, who began pressuring government for a live-in judge several months ago, after learning of the huge case backlogs caused by the current fly-in, fly-out system of District Court justice.

“This is a genuinely important announcement for our region,” Mr Marshall said.

“We have people living in our communities who were charged with serious offences years ago, but their case has not been heard by a judge because of the enormous backlog clogging up our District Courts.

“I thank the Attorney General and the State Government for understanding the commonsense of my ‘Judges for the bush’ campaign. With this announcement, they have done a great service for the legal profession and our communities.”

Currently, the region’s District Courts are serviced by circuit judges flown up from their Sydney base at the start of sitting weeks, accommodated in local hotels, and flown back to Sydney at week’s end.

Armidale lawyer Greg Moin of Moin & Associates said this process has led to such a backlog of cases that “the system is broken”.

“I have a client who has been on bail for two and a half years, waiting for trial, because our District Court has become so clogged,” Mr Moin said.

“It is fantastic news that we will get our own judge. It will make a huge difference to how the justice system works in the region.”

Mr Marshall said that the assignment of a permanent judge to the region was further acknowledgement by the State Government that the Northern Tablelands is growing too big to ignore.

“I will continue to fight for State investment here, and for private investment in community-building enterprises like renewable energy.

“The Northern Tablelands has the potential to be a regional powerhouse. Getting our legal system working properly is just one step in that process. With the community’s support, I intend to continue down the road we are building towards a flourishing, independent, robust regional economy.”