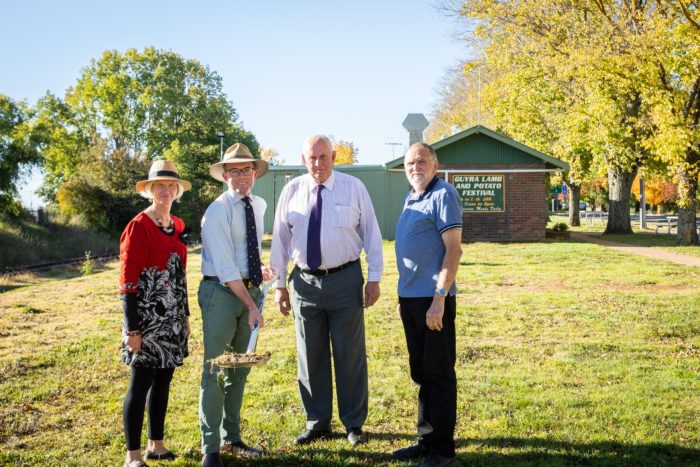 THE area behind the Big Lamb at Guyra will look more like a working farm and less like a park over the coming months, with Northern Tablelands MP Adam Marshall this week turning the first ceremonial sod of soil to start construction on the new $130,000 Guyra Lamb and Potato Festival undercover performance and dining area.

Last year, the State Government provided the significant grant so the festival committee could build a permanent, all-weather shed alongside its existing canteen.

Mr Marshall said the shed would give patrons a comfortable space to tuck into a famous lamb and gravy roll and enjoy some local country music.

“By the time the next year’s Guyra Lamb and Potato Festival rolls around there will be an impressive 10 by 18-metre shed standing ready to welcome visitors and musos,” Mr Marshall said.

“Every year it is a lottery as to what the weather is going to do at the Lamb and Potato Festival.

“To off-set the impact the weather has on patron numbers, a corrugated iron shed will be erected on a concrete slab directly behind the Big Lamb.

“With room for a stage and seating for up to 60 people, the permanent building will be equipped with roller doors which can be utilised during Guyra’s torrential summer storms or opened during a sweltering January afternoon.

“Armidale Regional Council has signed off on the development application which means construction is imminent.

“Each year the Lamb and Potato Festival is a quality showcase of what the Guyra area has to offer and hopefully this new building will support the committee to grow and develop the event into the future.”

Lamb and Potato Festival President Steve Mepham said the building would slash thousands of dollars and multiple man hours off running the event.

“The shed will replace two marquees which are normally hired each year, at a combined cost of $6,000,” Mr Mepham said.

“Traditionally the marquees take half-a-day before the festival to put up and another half-day to pull down, creating additional work for a volunteers who already give up time off their farms to support the 13-day event.

“The festival runs on the smell of an oily rag each year and so the $6,000 we save on hiring a marquee will be able to be spent improving other facilities like our kitchen.

“With council approving our development application, I expect we will have contractors on site in by the second half of this year, with the hope of having the build complete in time for the 2022 festival.”