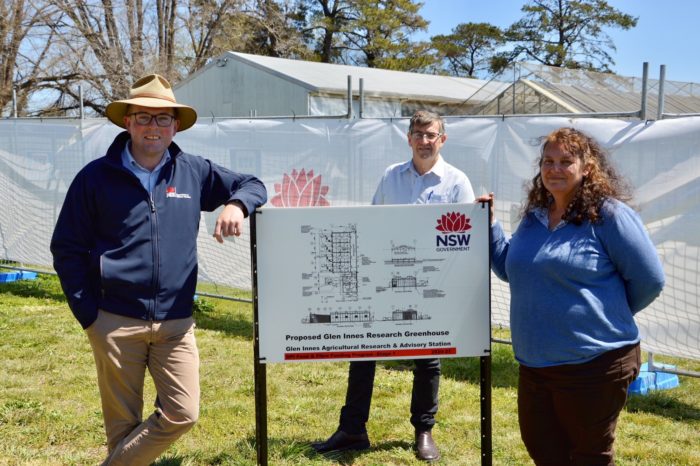 Member for Northern Tablelands and Minister for Agriculture Adam Marshall turned the first sod of soil on the $1.7 million facility last Friday, which he said would advance research and development programs of the State’s pasture-based sheep and cattle industries.

“Our farmers are the world’s best and by investing in research programs right here in our region, we give them a platform to become even better,” Mr Marshall said.

“From inside this new purpose-built glasshouse we will develop new resilient farming systems, which aim to reduce the potential impact of variable climate to benefit the State’s red meat industries by at least $1 billion per year.

“Researchers will investigate everything from tropical pasture grasses to developing strategies for the management of invasive perennial weeds such as Chilean Needle Grass, which infest pastures across the Northern Tablelands and cost farmers millions of dollars each year to control.”

The State Government has invested significantly in the livestock industries and the research at the Glen Innes glasshouse will be in partnership with Research and Development Corporations such as Meat and Livestock Australia and across other NSW DPI sites.

Mr Marshall said the modern glasshouse facility would be built by a Tamworth-based construction company and once complete would provide new capabilities to examine the problems that face producers in the region.

“A major issue impacting farmers around Glen Innes and other high rainfall areas of NSW is a decrease of legumes such as clover in pastures across these regions,” he said.

“If those producers can improve legume content on-farm it could increase livestock carrying capacity, with an estimated benefit of $750 million per year.

“Grazing is the mainstay agricultural activity on the Northern Tablelands, so it’s crucial we ensure farmers have the knowledge they need.

“The glasshouse provides this by examining the problems of soil fertility and nutrient deficiency specific to the area.

“The State Government is proud to make this investment to expand the long history of agricultural research and development at Glen Innes.”

PARENTS & CARERS TO BE WELCOMED INTO SCHOOLS FOR FIRST DAY BACK

$63,000 RAMPS UP ACCESS TO GUYRA COMMUNITY HALL AT SHOWGROUND