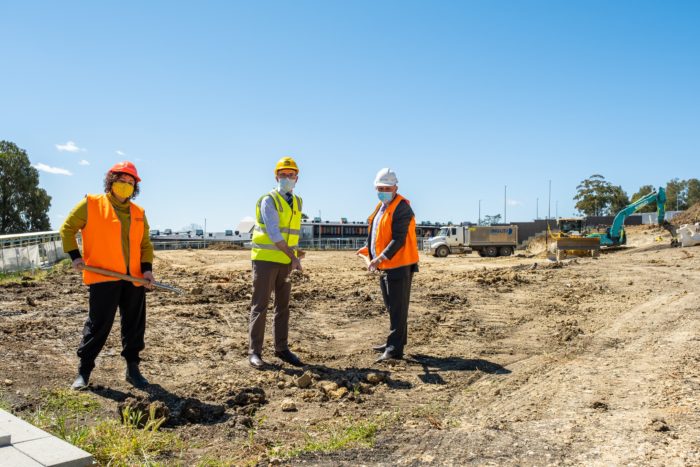 Mr Marshall said the hall would round out the ground-breaking $121 million development.

“This is an important project, not just for the school, but for the wider Armidale community,” Mr Marshall said.

“This new standalone building will bring performing arts and sport together under one roof, giving the school community a central place to gather and celebrate the school’s achievements.

“The hall, which is being built next to the new car park at the south of the school site, will boast generous hall space, stage and seating for performances and school functions.

“It will also include a green room, two indoor basketball courts, a fitness and movement studio and two general learning spaces.

“The project is expected to be complete by the middle of next year.

“The new school facilities are absolutely incredible and the new hall will complete this chapter of historic investment in Armidale’s public school infrastructure.”

Mr Marshall said there has been a heightened effort to hire local sub-contractors as a result of the COVID-19 outbreak in Sydney.

“So far upward of 60 per cent of tradespeople engaged to work on the build are businesses from the New England North West,” he said.

“There will be around 400 individual tradies working across the duration of construction.

“The building site is cordoned off from the rest of the campus, allowing it to proceed under the level 3 return to school restrictions.

“Richard Crookes Construction has a proven track record of managing large scale worksites in a COVID safe and the community should have peace of mind for the duration of this build.”

Minister for Education Sarah Mitchell welcomed the news that the contract had been awarded for the new hall at Armidale Secondary College and work was starting.

“I’m proud that the NSW Government is delivering such an important project for the Armidale community,” Mrs Mitchell said.

“I’m very pleased to be able to say that the majority of tradespeople on the project will come from the New England region.”

Students at Armidale Secondary College are already enjoying their new and upgraded facilities.

The $121 million upgrade has delivered 79 new classrooms including specialised spaces for science, industrial arts and hospitality, improved performing arts and sports facilities and connections between indoor and outdoor learning, as well as a new agricultural facility.