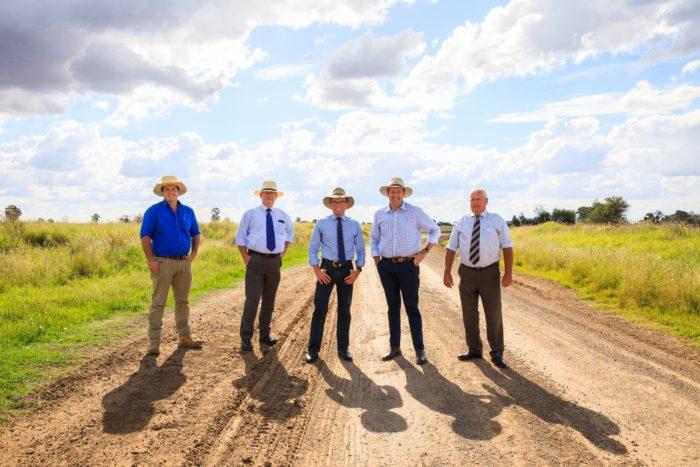 Mr Marshall said IB Bore Road was a key transport route for thousands of tonnes of agricultural produce onto the Newell Highway.

“For broadacre farmers in the north of the golden triangle, IB Bore road is vital for getting product from paddock to market quickly and efficiently,” Mr Marshall said.

“Work is now underway to rebuild and bitumen seal a 20 kilometre section of the road, between North Star and the Newell Highway, to a standard suitable for heavy vehicles.

“Anyone who has travelled this road in its current state knows how rough it is on vehicles and passengers.

“This work will address significant corrugation which has existed for many years and improve the roads durability during wet weather.

“The incredible amount of rain over the past twelve months has significantly delayed the project, however Gwydir Shire Council has now completed drainage works and anticipates earthworks will commence in July, with the first section of bitumen sealing set to start in September.

“With the re-sheeting of Getta Getta Road east of North Star funded and scheduled for later this year, growers are set reap the financial benefits of a high-quality heavy vehicle freight connection feeding to Moree and Goondiwindi.”

Gwydir Shire Mayor John Coulton said the upgrade to IB Bore Road was a welcome improvement for residents who travel this road daily.

“Locals have had to endure substandard road conditions for many years, this development will make their everyday commute much more pleasant,” Cr Coulton said.