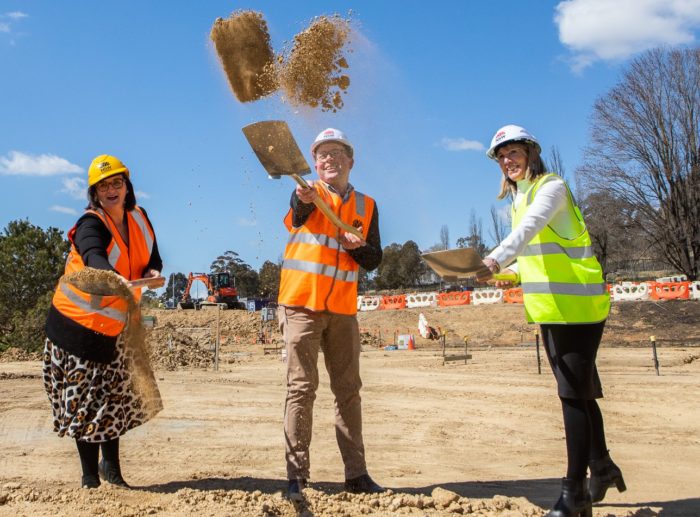 THE next stage of the $121 million Armidale Secondary College development has officially commenced today with Member for Northern Tablelands Adam Marshall and Minister for Education Sarah Mitchell turning the first ceremonial sod of soil on the state-of-the-art Agricultural Hub.

“It is so exciting to be here to mark the beginning of what is going to be a world-class agricultural learning space for students in Armidale,” Mr Marshall said.

“This new agriculture centre, available to all year groups at Armidale Secondary College, features a strong focus on technology with wireless sensors throughout, connected to a centralised computer for students to analyse data across agriculture, primary industry and animal husbandry.

“Students will be able to measure and analyse moisture, feed and temperature data, learn about the latest animal husbandry methods and will be supported to proceed to pursue further study in agricultural excellence.

“This smart farm will be the training ground for our next generation of farmers, exposing students to advanced technologies and inspiring them to be innovative and maybe pursue a career in a field they may previously not have thought about.”

“Armidale Secondary College is literally only months away from welcoming students and taking them on a bright new educational journey,” Mr Marshall said.

“As well as this fantastic new agricultural facility, the development has seen the delivery of 79 new classrooms, specialised spaces for science, industrial arts and hospitality and sports facilities and covered connections between indoor and outdoor learning.

“The repurposed 98-year-old Armidale High School main office building is particularly spectacular, transformed into a centre for performing and visual arts. Equipped with musical rehearsal space, specialised glass partitions and wet areas for painting there really is nothing like it in our region.

“With the furniture delivered to the school’s main buildings, contractors are now adding the finishing touches in preparation for teachers and staff to start relocating from the Duval Campus at the end of the school year.

“What this new school has shown is that just because you don’t live in Sydney doesn’t mean you should miss out on the very best public education and I am so proud of what has been delivered for the 1,500 students who will benefit when the doors officially open from Day 1, Term 1 next year.”