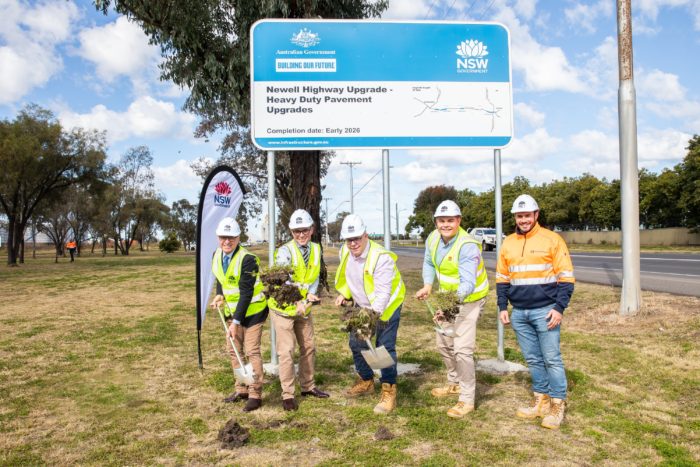 TWO new intersections and three new overtaking lanes will make up the first stage of the largest-ever upgrade of the Newell Highway, since it was first sealed 50 years ago, with Northern Tablelands MP Adam Marshall and Moree Plains Shire Mayor Mark Johnson turning the first ceremonial sod of soil on the project this week.

The ceremony marked the start of the $262 million joint investment from the Australian and NSW governments to widen and strengthen 27.3 kilometres of the critical freight route, along four priority sections between Narrabri and Moree.

“Work is commencing on the two sections of road simultaneously,” Mr Marshall said.

“Once completed, safety and connectivity will be improved for all motorists and 640 jobs will be supported throughout the project construction.”

Regional Transport and Roads Minister Sam Farraway said the State Government was delivering a safer and stronger network with work now commenced on the Newell Highway between Narrabri and Moree.

“This upgrade will have significant benefits for motorists including reduced travel times, better access during and after wet weather and improved freight productivity,” Mr Farraway said.

“We are investing in what matters to our local community and making our network safer, to help make sure everyone out on our roads gets home safely – just one way we are securing a brighter future for NSW.”

The Newell Highway heavy duty pavement upgrade forms part of the Australian and NSW governments’ $1.7 billion commitment to upgrading the longest highway with inland connections to both Victoria and Queensland.

More information on the Newell Highway heavy duty pavement upgrade can be found at www.nswroads.work/n2m