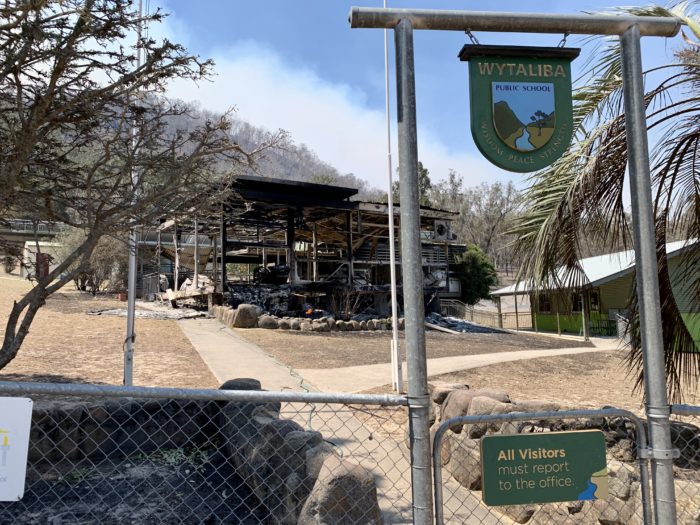 Photo caption: The scene at Wytaliba Public School over the weekend.

The school was one of around 60 properties destroyed or badly damaged by the ferocious Kangawalla fire which ripped through the small remote community last Friday afternoon and evening.

Mr Marshall visited the community and surveyed the scene and the damage at the school and in the village over the weekend and sought commitments from the NSW Department of Education that the school would be rebuilt and re-opened.

“Education Minister Sarah Mitchell confirmed to me personally yesterday that Wytaliba Public School will definitely be rebuilt, which is very welcome news for the community and the 15 students enrolled there,” Mr Marshall said.

“Concerns were expressed to me by locals over the weekend that the Department might not re-open the school and continue to bus students into Glen Innes or Red Range Public Schools – I’m pleased to say that won’t be happening.

“Obviously, the school will be out of action for some time and we’ll know more once a team from the Department get onsite this week to assess the extent of the damage and what will be required to rebuild the school.

“There is also an option of bringing in demountable classrooms as temporary measure to get the school open more quickly until permeant buildings works can be completed.

“I’ll continue to keep a close eye on the situation, advise the community, and ensure normal schooling is restored at Wytaliba as quickly as possible.”

In the meantime, the Department of Education has made arrangements for students at Wytaliba to be transported and schooled at either Red Range or Glen Innes Public Schools, until Wytaliba is re-opened.

“Each school will advise their parents about timing around re-opening these schools, depending on the fire risk tomorrow and throughout the week,” Mr Marshall said.