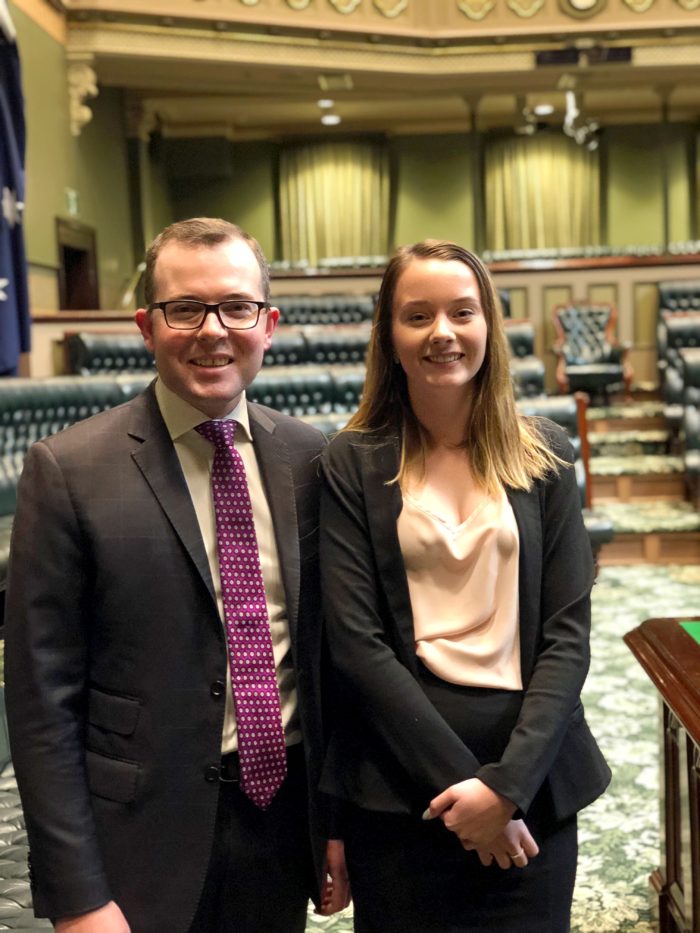 URALLA Central School Year 10 student Gemma Weguelin is experiencing life as an MP this week as she makes herself at home in Sydney’s Macquarie Street Parliament House for the 2018 YMCA Youth Parliament.

Member for Northern Tablelands Adam Marshall was on hand to meet Gemma during the opening session of the Youth Parliament in the Bear Pit (Legislative Assembly chamber) yesterday.

The first Youth Parliament alumnus to be elected to the NSW Parliament, Mr Marshall chaired a debate on a motion to means test and scale penalty fines based on a person’s income, in the Legislative Assembly.

He also addressed Youth MPs about the life of a local member of parliament and how to get involved in leadership roles in the local community.

“I was very proud to welcome Gemma back to Youth Parliament again this year and watch her make a very considered, passionate and mature contribution to the debate in the House yesterday.

“Gemma is an outstanding advocate for country NSW and a young woman who I have no doubt will be hugely successful in whatever career she embarks on,” Mr Marshall said.

“It was a real pleasure to attend yesterday’s first sitting day of the Youth Parliament and see Gemma and her peers debating important issues with great gusto in the ‘bear pit’ such as mental health classes for school students, changing the role of school welfare counsellors and the introduction of Aboriginal language into the curriculum. They certainly did us proud.”

Returning for her third year in the Junior and Youth Parliament programs, Gemma was elected as Shadow Minister for Northern NSW by her peers.

“This is a terrific initiative and I encourage any young people interested in youth leadership and governance to consider applying for the 2019 Junior and Youth Parliaments,” Mr Marshall said.

Member for Northern Tablelands at Mungindi on the NSW/Queensland border. He’s encouraging locals to apply for funding from the... Read More