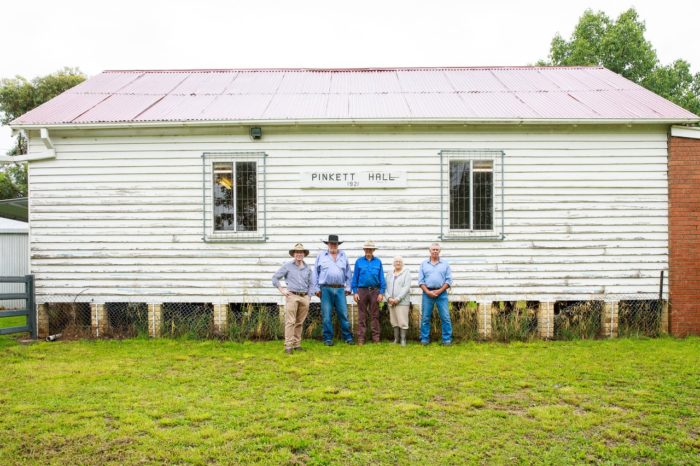 As a gift to the Pinkett Hall ahead of its 100th birthday, Northern Tablelands MP Adam Marshall has today announced a $28,000 State Government grant to re-roof the building and upgrade its electrical wiring.

Mr Marshall said the hall was completed in 1921, as a memorial for locals who served in World War One.

“The official opening of the Pinkett Memorial Hall was described in the Glen Innes Examiner, February 1921, as the largest gathering Pinkett had ever participated,” Mr Marshall said.

“While there have been plenty of gatherings since then, that statement will definitely be challenged in 2021, when locals celebrate the building as it blows out the candles on 100 years.

“To make sure the hall looks its best for the occasion, the Pinkett Hall Committee will use these funds to install a new iron roof.

“With Pinkett getting its fair share of rain over the past twelve months, a new roof will help prevent internal water damage, while improving the overall look of the structure.

“To ensure reliability of power supply across the Pinkett Sportsground, underground electrical wiring will be installed between the hall and outbuildings. Inside the hall internal wiring will also be updated to reduce the risk of electrical faults and make working in the hall safer for user-groups.

“Just as it was 100 years ago, Pinkett Hall remains a popular, central meeting place for residents and following these works I expect it will continue to do so for many years to come,” Mr Marshall said.

President of the Pinkett Hall Committee Trevor Miller said after 99 years and 10 months the old hall was due for a freshen-up.

“As is the case in most small rural localities the local hall is the beating heart of the community,” Mr Miller said.

“Pinkett is no different and our hall is used all year round for public meetings, equine events and our great Christmas get-together.

“While the original workmanship has stood the test of time, we want the building to look its absolute best for the centenary and be in a position where it can potentially continue to serve the community for another 100 years.

“Not only will improving the electrical wiring make the building safe, but it will also reduce our power costs and subsequently the lower the cost of hiring the venue out.

“I have no doubt, as our committee continues to work through the list of maintenance projects across the grounds, we will have a facility which will be capable of serving a greater number of people than ever before.”