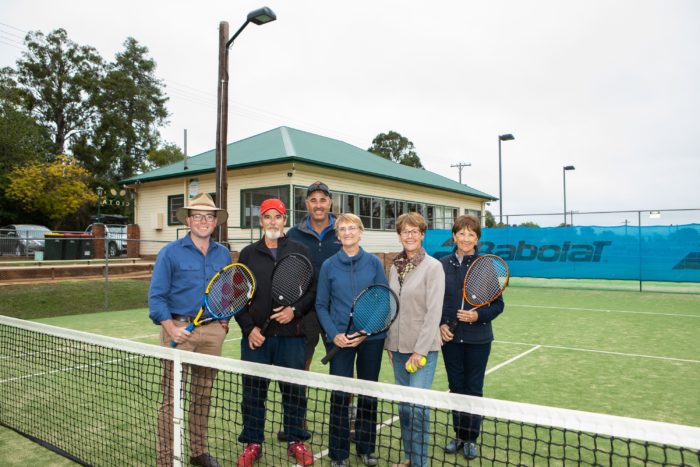 NOTE: The attached photo was taken a number of weeks ago, before the current COVID-19 social gathering/distancing restrictions.

“For 60 years the existing tennis club fence has prevented rogue balls from flying onto nearby roads and stopped vandals damaging the courts,” Mr Marshall said.

“Made from chicken wire the fence is starting to fall into disrepair, with a large number of holes developing in the mesh and sharp edges protruding into the courts, making it unsafe for players.

“These funds will allow that old fence to be dismantled and 752 metres, of three metre high, chain wire fence erected around the perimeter of the courts.

“This new fence should have the longevity of its predecessor, with a bottom rail and additional uprights added which will allow the chain link to be more securely fastened and make the fence stronger,” Mr Marshall said.

“Over the last twelve months considerable money has been spent upgrading the old courts and while that’s great, unfortunately the outside of the facility looks a little tired,” Mr Whyte said.

“As they say first impressions are most important and now we have this incredibly generous grant from the State-Government, we have the ability to freshen up the outside of our club.

“The old chicken wire fence has posed a considerable safety risk for players, especially juniors, as it sits exactly at their height and if they happen to run into it, it has the potential to cut players.

“Once we have upgraded the fence the next project the committee will be working on will be to add extra gates onto the court to improve wheelchair access,” Mr Whyte said.

Mr Marshall said this latest grant means more than $200,000 has been spent in the last two years bringing the facility up to the highest playing standard.

“Glen Innes Tennis Club has new courts and now with this fence it will be in the box seat to attract and host future regional tournaments.”

“It’s long been the dream of the committee to be able to hold a premier event which draws players to town and injects dollars into the local economy.

“The Glen Innes Tennis Club committee must be congratulated on the work it has put into making its courts a first class regional tennis complex.”