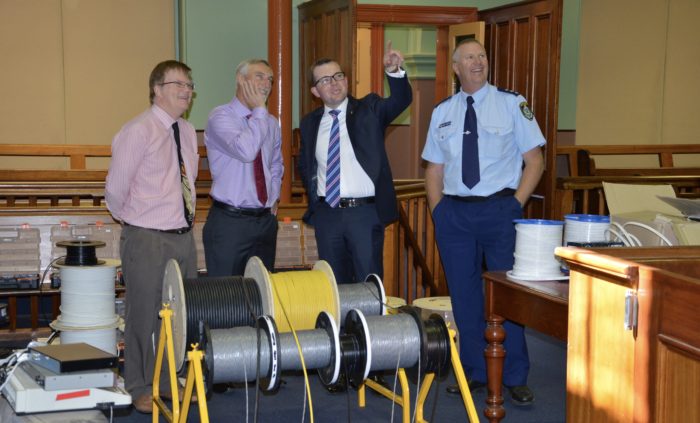 NORTHERN Tablelands MP Adam Marshall today announced a $160,000 technology upgrade for the Inverell Courthouse which will improve safety, the efficiency of hearings and provide better facilities for vulnerable witnesses.

Mr Marshall said for the first time in its 130-year history, the Inverell Courthouse would have Audio Visual Link which means many detainees will appear from prison and evidence can be taken from interstate and overseas witnesses.

“The technology will make a huge difference to the way proceedings are conducted, as prisoners will no longer need to transported lengthy distances to Inverell for court matters that may only take a couple of minutes and neither will witnesses during trials,” Mr Marshall said.

“AVL will reduce the risk of escapes, cut delays caused by waiting for prisoners to physically arrive at court and free up police to do other frontline work.”

Mr Marshall said the courtroom will have a laptop computer for presenting evidence and a document camera capable to zooming in on exhibits and projecting them onto a large LCD screen.

“The upgrade will also include improved technology for vulnerable witnesses, such as victims of domestic violence, to give ‘in camera’ evidence from a private room,” he said.

“It’s important to provide children, sexual assault victims and other vulnerable witnesses with a private and comfortable space where they can testify – away from the stressful environment of the courtroom.

“Audio Visual Link is now operating in hundreds of justice facilities across NSW including 203 courtrooms at 68 locations, saving taxpayers millions of dollars each year.”

Late last year Deputy Premier Troy Grant visited Inverell at to inspect the police station. Mr Marshall took the opportunity, with local police, to show the Justice and Police Minister the lack of modern technology in the courthouse, which hindered police and the court carry out their duties effectively.

“I’m very pleased the Deputy Premier took our concerns on board and helped me convince the Attorney General to make these funds available to upgrade the courthouse,” Mr Marshall said.

“No longer will the police have to take their own laptop into court and have everyone gather round the screen to watch CCTV footage evidence.

“This upgrade is about harnessing the power of technology to deliver a faster, fairer and more efficient justice system in Inverell.”

Work has commenced on the upgrade and is expected to be completed by the middle of next month.