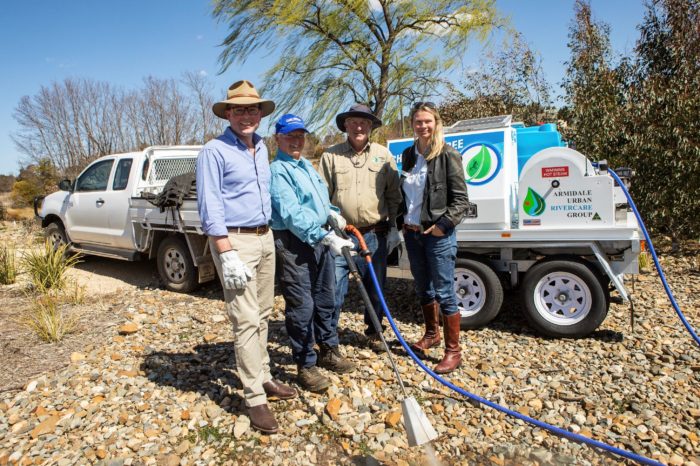 The Armidale Urban Rivercare Group (ARUG) is waging a war on weeds in and around the Armidale creek lands and it has received a much-needed new weapon to aide its fight, with a new trailer-mounted steam weeder now in operation, thanks to a $25,000 State Government grant.

Northern Tablelands MP Adam Marshall visited the picturesque Dumaresq Creek yesterday to see the work of the ARUG volunteers first-hand and what they’re achieving with the environmentally friendly machine.

“Armidale is well known for its quality creeks and walking paths which run through the heart of the city,” Mr Marshall said.

“Since its inception in 2001 Armidale Urban Rivercare Group (AURG), led by Bruce Whan, has done an incredible job re-establishing native vegetation, clearing woody weeds and restoring access to the creek for visitors.

“One of the biggest issues now facing Dumaresq Creek is management of woody weeds like privet and willow as well as smaller introduced grasses.

“This steam machines kills these pests by using extreme heat and pressure to melt plant cells without having to use harmful herbicides.”

ARUG Chairman Bruce Whan said the machine would drastically cut the man power need to keep on top of weeds.

“AURG is a group of 10 to 20 volunteers who manage to achieve a lot with very little,” Mr Whan said.

“This weed killer will allow our members to eradicate large masses of weeds quickly and as they appear reducing the amount of ongoing work for volunteers.

“In the nearly 20 years AURG has been holding working bees and community days I think there has been a major improvement in both the look and health of Dumaresq Creek.

“The Armidale creek lands really are one of the city’s most important assets and by improving the waterway hopefully more people will be encouraged to take a walk along the footpath and enjoy our beautiful natural surrounds.”