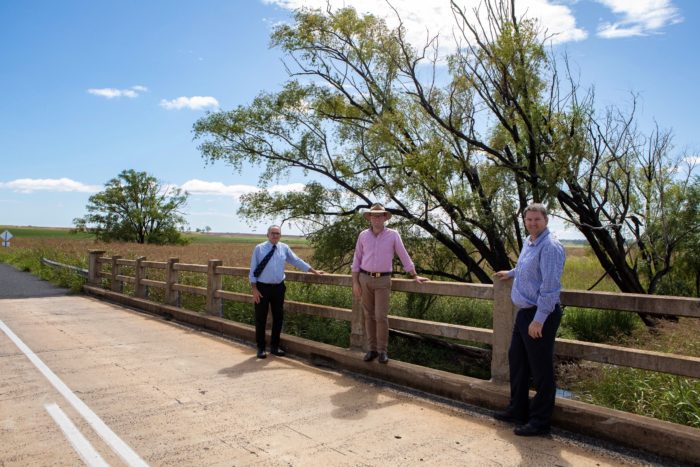 ONE of the region’s most important freight links, which connects Inverell to Queensland, is about to undergo a major upgrade, with Agriculture Minister and Northern Tablelands MP Adam Marshall today announcing a $3.685 million State Government grant to widen and resurface sections of Yetman Road.

Mr Marshall made the announcement alongside Inverell Shire Deputy Mayor Anthony Michael and said the route was utilised by some of Inverell Shire’s largest agricultural holdings, feed-lot operators and grain traders.

“As the agriculture sector rebuilds following years of drought and hardship, every effort needs to be taken to reduce costs and increase returns for our farmers,” Mr Marshall said.

“Over the next three years Inverell Shire Council will resurface a 12-kilometre stretch of Yetman Road, from the Inverell livestock Exchange to Oakwood and widen it to 8.6 metres.

“The decks of bridges over Rob Roy Creek, Jessies Gully and Hunts Gully will also be widened to 9.6 metres, improving safety for all motorists using the road.

“Making these adjustments will support efforts to change Yetman Road from an approved B Double route, to A-Double (road-train) route.

“This change will make it easier for agricultural operators to shift large amounts of product, without needed multiple trucks.

“With road-trains able to flow between Inverell and Queensland border, there will be a considerable reduction in the cost of freight for businesses big and small.”

Deputy Mayor Anthony Michael said the project would improve the flow of close to $60 million worth of agricultural produce each year.

“Inverell is the geographic heart of the Northern Tablelands, with its road network connecting the agricultural sector to important markets in the north to Queensland, south to Sydney, east to the coast and west to Moree,” Cr Michael said.

“Yetman Road has always been considered an essential part of our region’s freight network with each year around $12 million in grain and $42 million worth of livestock travelling along it to destinations across northern NSW.

“An added benefit of these upgrades will be the halving of council’s maintenance bill for Yetman Road, freeing up capital for other important projects across our community.

“This upgrade has been widely supported by local grain traders, livestock freight companies and primary producers and I’m glad the State Government has been able to deliver this funding which will improve efficiency for these different industries into the future.”