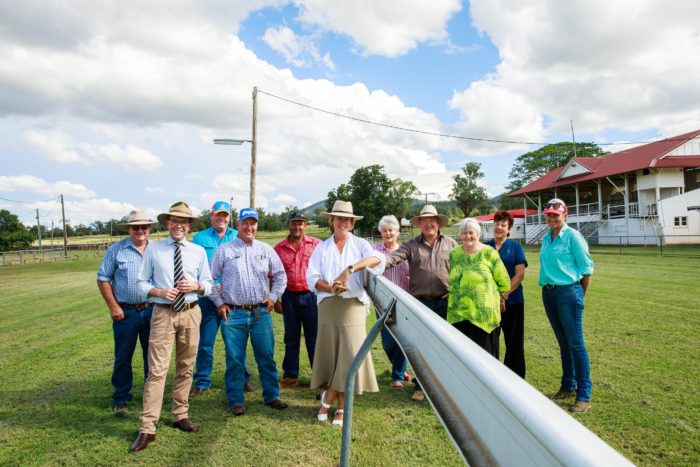 BINGARA Showground will soon undergo its largest upgrade in decades, thanks to a $380,158 State Government cash injection to improve amenities and camping facilities and lighting at the grounds, announced today by Member for Northern Tablelands Adam Marshall.

In the last 12 months the State Government has provided $627,082 in stimulus funding for Bingara Showground, for the refurbishment of the aged grandstand, repairs to cool rooms and various safety improvements across the ground.

Mr Marshall said each of the recent upgrades has been done to allow Bingara Showground to accommodate large community events and reduce costs for user groups.

“Aside from camping, Bingara Showground services four different user groups who all host events which are important money spinners for the local economy,” Mr Marshall said.

“To ensure the ongoing success of these gatherings, Bingara Showground will soon have a new amenities building with an accessible bathroom, three unisex toilets and two unisex showers.

“The new building will be constructed adjacent to the existing amenities and includes a common roof structure over the new and existing building.

“Gwydir Shire Council wants to have the amenities complete by September, in time for hundreds of travellers to roll into town for the Campervan and Motorhome Club of Australia rally in October.

“Funds are also being spent on new LED lighting around the main arena.

“Improved lighting will increase safety and permit events like rodeos and entertainment during the show, which in turn will attract larger crowds and generate more income for Bingara Show Society.”

Bingara Polocrosse committee’s Scott McLachlan said the new amenities would be an asset to all users of the showground.

“Until now the existing toilets, on the eastern side of the ground which we utilise, have not been large enough to cater for polocrosse carnivals and the facilities on the western side of the showground are too far away to be utilised effectively.

“Having accessible amenities at the showground will make participating in our polocrosse carnivals a much more enjoyable experience for everyone.”

“Having the ability to light up the arena in the evenings would mean we could have twilight events during camps and extend our overall riding season,” Ms Lewis said.

“LED lighting is also more energy efficient and cheaper to run which will save user groups like us financially through lower power bills.”