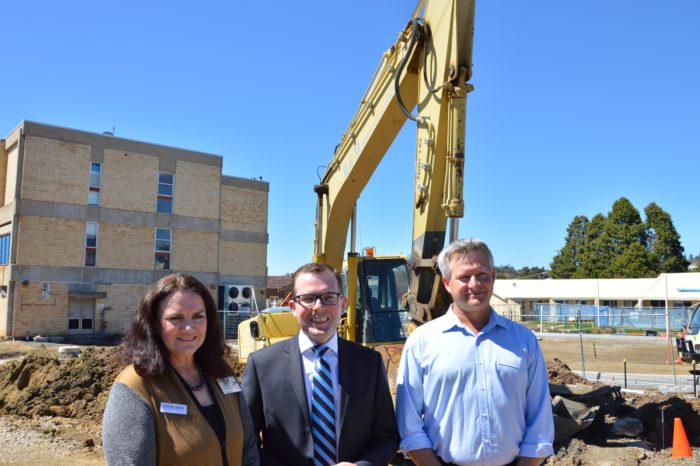 THE starting gun has been fired on $60 million redevelopment of Armidale’s Rural Referral Hospital today with Northern Tablelands MP Adam Marshall announcing the main works contract for the project has been awarded to regionally-based company Richard Crookes Constructions.

Mr Marshall said the company has a base in Tamworth and is currently completing the $15 million rebuild of Moree East Public School and has previously worked on health projects in Tamworth.

“I’m delighted a company from our region has won this contract,” Mr Marshall said.

“I’ve been impressed with their work at Moree and also with their commitment to using local tradespeople and staff on their worksites.”

Mr Marshall said the announcement of the contract was a major milestone for the project.

“With the contract now awarded, we will soon start putting down the bricks and mortar of the new four-storey building that will house the hospital’s new emergency department, new critical care unit, new in-patient ward, new operating theatres and a new sterilising unit,” he said.

“When the upgrade is complete, far fewer Northern Tablelands residents will have to travel far away from their homes and families to get specialist medical attention. Armidale Hospital will be a far more capable of dealing with the medical requirements of our region.

“This is another tremendous day for Armidale and the region and is testament to the passion of the community fighting for this redevelopment for so long.”

The hospital redevelopment will complement the new University of New England Tablelands Clinical School and the Ambulatory Care and Chemotherapy building to make Armidale a world-class regional health precinct.

“Armidale’s doctors, nurses, clinicians, hospital management and the community have been consulted throughout the planning process, providing crucial insight for the redevelopment project.”

Upon completion of the site preparation works in October, the main works will kick off.

Construction of the new building is expected to be completed in late 2017, with the refurbishment being completed in 2018.