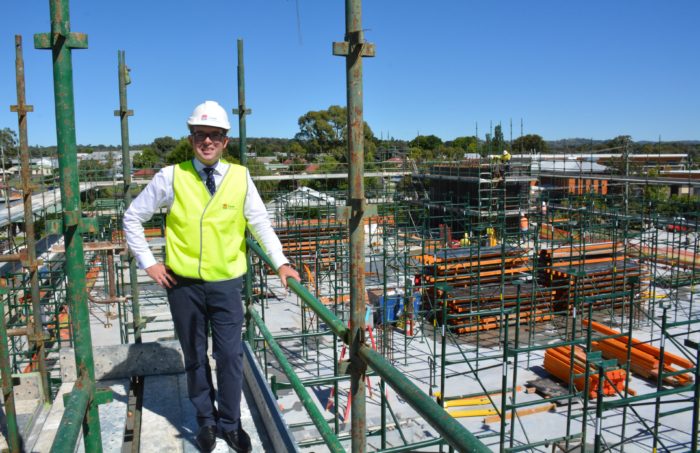 Northern Tablelands MP Adam Marshall atop the third storey concrete pour overlooking the space where the new operating theatres will be located.

The new third floor section will house the perioperative suite and day surgery facilities, catering for patients undergoing elective surgery. When the hospital opens early next year, the floor will be abuzz with specialists and nurses, taking on advanced clinical tasks. It will also see four new theatres, doubling the capacity of the current hospital.

“Now we’re progressing for the fourth and final slab to be poured, which should occur in about three-and-a-half weeks.”

“It’s incredible that in just months this huge building has sprung up, seemingly from nowhere. I pass by on most days, but it’s when you stand on top that you realise what how quickly it’s coming together,” he said.

“People from across the Northern Tablelands often have to travel for medical help – when this floor is fully operational, it will mean most won’t have to travel nearly as far.

“This is a crucial floor to attract specialists to Armidale Hospital, as it is on this floor that many will do their highly skilled work. It may not look like much now – but this is a perfect blank slate upon which we’ll draw up our hospital of the future.”

The next and final pour will be for the Central Sterile Serviced Department, which ensures tools and equipment are aseptic and ready for medical procedures. That pour is expected to happen mid-March, with the final section of steel roofing to follow shortly thereafter.

The first floor, housing the new and expanded Emergency Department is already being fitted out by local tradespeople, slightly ahead of schedule.