DEATH AND DISABILITY CHANGES A TOP CALL FOR OUR LOCAL AMBOS 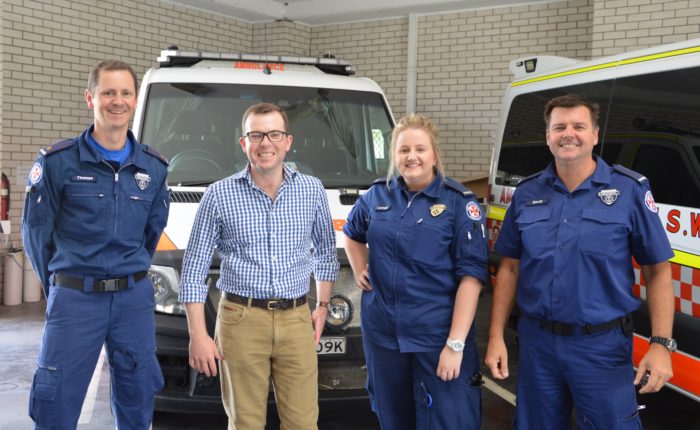 “This is truly great news and vindication of the community’s campaign in support of our local paramedics,” Mr Marshall said.

“From the start, I fought for the best coverage for paramedics and today’s announcement will ensure their physical and mental wellbeing will be secured and it’s a much better deal than their current workplace agreement.

“While last year’s agreement took steps forward in some areas, it was a massive leap backward in others. Our Police and Firefighters have a well-deserved seven year scheme, so ambos were understandably concerned about facing just two years of coverage.”

The new NSW Ambulance Death and Income Protection Benefits Award was introduced in August 2016 after state funding contributions passed a trigger point. Among other changes, the award changed disability entitlements from a variable lump sum to two years of regular payments.

“In September last year I joined a crew of Inverell paramedics for a day and while ‘on duty’ with them I got a very good understanding of the risks they face every day and a first responder to emergencies of all kinds,” Mr Marshall said.

“I saw the stresses that these front-line health workers go through every day. Whether it’s picking up heavy patients, working around car accidents, or dealing with people under the influence, paramedics face many risks in their selfless pursuit to keep us healthy.

“I want to thank those paramedics I met with, and particularly Clint McSpedden and the team at Inverell, and the local community. This was a joint effort and we have achieved a terrific result.”

Mr Marshall has met with paramedics from across the Tablelands, including Moree, Guyra, Ashford and Warialda. He’s elevated their concerns from ambulance station to the front door of parliament.

“The discussions I’ve had gave me an even greater respect for their work, as well as an understanding of the risks placed on workers, and the importance of a generous safety net to protect them if danger strikes,” he said.

“A two year income protection scheme may have given options to some people with more minor injuries, but for those suffering career ending accidents it simply isn’t enough.

“Today’s announcement will help ensure our nation’s most trusted professionals feel safe when they’re helping protect and save our lives every day.”

NSW Ambulance staff will vote on the proposal in the coming weeks.