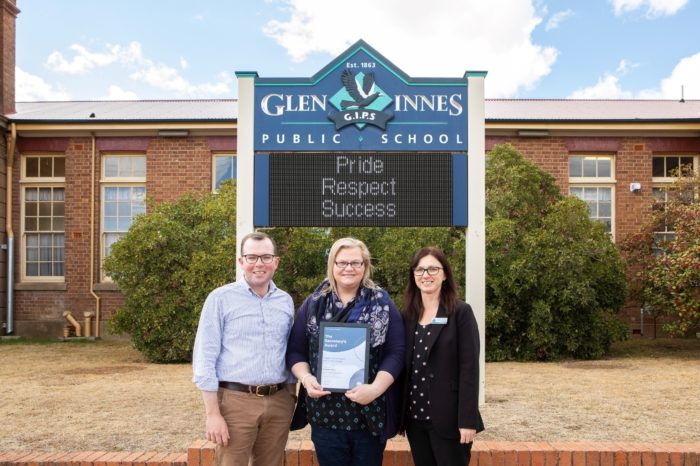 HARD-WORKING Glen Innes Public School parent Natasha Ward has been recognised for her contribution to education, receiving the Public School Parent of the Year Award at the recent NSW Minister’s 2019 Education Awards ceremony in Sydney.

This prestigious award is presented to parents, guardians and caregivers who have made a significant contribution to their local public school community.

Northern Tablelands MP Adam Marshall caught up with Natasha, who is also the President of the Glen Innes Public School P&C Association, this week to personally congratulate her on receiving the state-wide honour and thank her for working to improve the lives of the town’s school children.

“Without the fundraising efforts and dedication of P&C Associations many of our schools would go without new resources,” Mr Marshall said

“Natasha has been involved with Glen Innes Public School P&C for the last five years and has been a vocal advocate on behalf of the school community.

“As President she has been integral in securing government grants to improve the school’s toilets while also working to upgrade the school hall so it is able to host larger community events like the Celtic Festival.”

Mrs Ward said she was humbled to even be considered for the accolade.

“There are so many people who go above and beyond to make Glen Innes Public School a warm and welcoming place,” Mrs Ward said.

“One thing I’m particularly proud of is the ‘free hat for every child’ policy the school has adopted.

“Through the P&C every student at the school was given a new free school hat with the program then expanded to include every new enrolment.

“Times are tough for many farming families because of the drought and so every dollar which parents saved on school uniforms can be spent on other things like food for lunch boxes or stationary.”