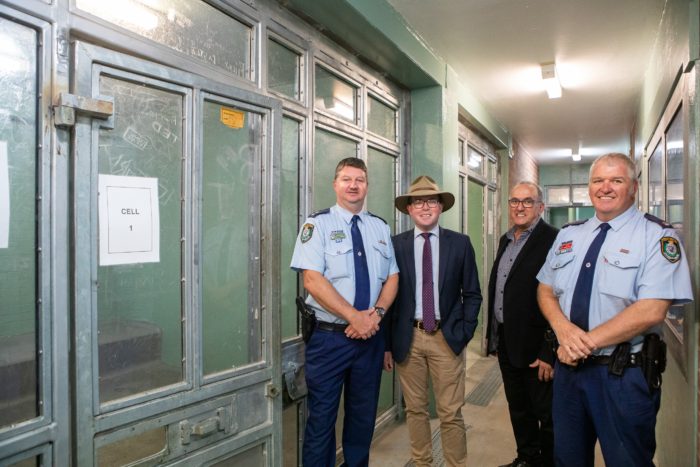 THE cells of the old Inverell Police Station have been bolted and the night shift clocked off for the last time as demolition teams start to dismantle the 60-year-old building to make way for the state-of-the-art, new $16 million 24-hour station, Northern Tablelands MP Adam Marshall said today.

Mr Marshall said the commencement of work was a relief to the community and hard-working local police who have worked in cramped and substandard conditions for too long.

“Finally the efforts of three years of hard campaigning is starting to bear fruit, with the community able to see in just over a year’s time it will have brand new spacious police station,” Mr Marshall said.

“Over the next two months the existing 60-year-old building will be levelled and debris taken away, before construction of the new $16 million facility starts in May.

“This new station will be the envy of every town in the electorate with new undercover parking bays for vehicles, plenty of storage space, new main access, secure fencing and undercover access way connecting the police station to the Inverell Court House.

“It really blows me away to think this time next year there will be a two story, modern facility standing on Otho Street, which will be large enough to comfortably house more than 60 local officers.”

Mr Marshall said for the past month officers have been busily packing up their desks in preparation to relocate to the temporary station at Campbell Street.

“Inverell residents can be rest assured a full police presence will remain in the community while the new station is being built,” he said.

“The temporary station has been set up to cater for the needs of the current police force and is equipped with holding cells, close circuit television and all the tools needed for officers to protect the community.

“It’s a very comfortable station that will work well for police and the community for the next 14 months.”