MALPAS DAM WALL RAISING MUST BE THE LEGACY OF DROUGHT: MARSHALL 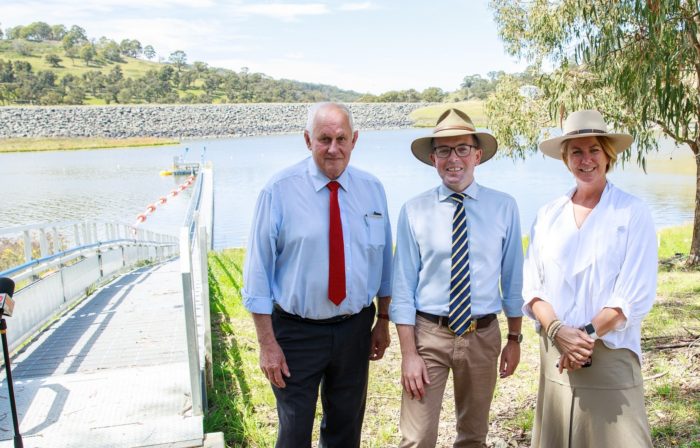 NORTHERN Tablelands MP Adam Marshall reiterated the need to have plans and costings for the raising of Malpas Dam wall completed as a matter of urgency yesterday, declaring the ambitious project must be a positive legacy to come from the worst drought in living memory.

The comments come following a meeting between Mr Marshall, Water Minister Melinda Pavey, Armidale Regional Council Mayor Ian Tiley and council’s water engineers, at Malpas Dam, where the Minister was provided with a progress update on the project’s feasibility study.

“When Malpas Dam was built nearly 60 years ago, it was done so with the view of increasing its capacity in line with the region’s population growth,” Mr Marshall said.

“The purpose of this meeting was to brief Minister Pavey on exactly where council is up to in the process of designing and costing the proposed 6.5 metre lifting of Malpas Dam wall.

“By doing this the storage capacity will more than double to 27 gigalites, transforming it into a regional water storage.

“Pleasingly, Mayor Tiley has today committed to increasing the number of staff council has working on the project, in order to deliver preliminary designs and costings by the end of April.

“I want to thank the Minister for coming to Armidale and hearing our ambitious, but worthwhile, proposal and I will continue to work with her as ARC achieves milestones throughout this planning process

“Now is the time for us to be as bold and as visionary as this region was back in the 1960s and after today I am confident we are on track to achieving that goal.”

Mr Marshall said raising the Malpas Dam wall is not the only option being considered in the pursuit the region’s water security.

“We need a long-term integrated water strategy that provides surety of supply to Armidale, Guyra and Uralla,” he said.

“To achieve that goal nothing is off the table and through this feasibility process, council is looking at the viability of alternate water storages or even pumping water to Malpas Dam from rivers which feed over the range to the coast.

“This feasibility work is a large undertaking for council and I want to recognise the efforts of Cr Tiley and council’s water engineers to date in pursuing this vision for a larger and more versatile Malpas Dam.”