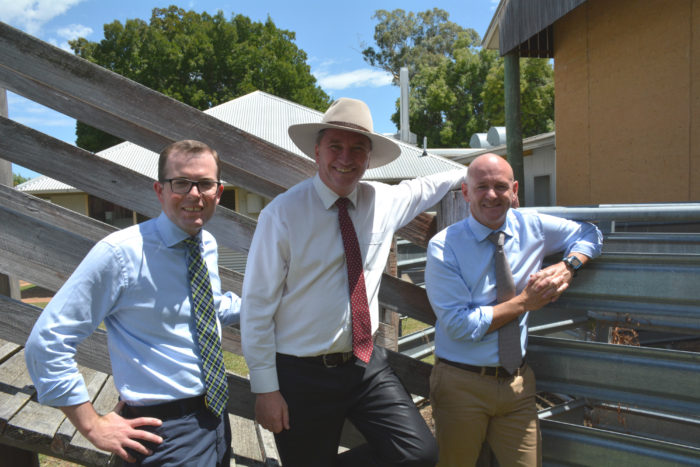 THE NSW and Commonwealth Governments will co-invest into two research and development programs, that will focus on productivity and genetic improvements that are crucial for the sustainability and long-term profitability of the livestock industry.

Member for Northern Tablelands Adam Marshall said the NSW Government, through the Department of Primary Industries (DPI), has made a $22.5 million, five-year commitment to key research initiatives that will benefit the sheep and cattle industries.

The announcement was made today at the NSW DPI research facility at the University of New England by Primary Industries Minister Niall Blair and Deputy prime Minister Barnaby Joyce.

“Across the New England North West we’ve got some 1.6 million beef cattle and nearly twice that many sheep. Driving from Armidale to Glen Innes or Inverell, you can easily see what a big role livestock plays in our economy,” said Mr Marshall.

“Every effort to improve the efficiency of these livestock can quickly accumulate to benefits for the region of millions of dollars, and that ripples not only through the supply chain, but flows across the region’s economy.

“Previously, funding arrangements for these vital programs to find new tools to drive efficiencies were ad-hoc, providing little certainty for scientists and industry. Through a five year funding framework, primary producers and researchers can be assured work will be ongoing”

Additionally, both State and Federal will collaborate to fund broader research on the red meat industry – driving efficiency from paddock to plate. This will be undertaken through the MLA, UNE and the CSIRO.

The gross value of production (GVP) of the NSW primary industries sector has increased 17 per cent over the past two years. Beef meat has the highest GVP for 2015-16 at $2.8billion whilst the GVP of sheep meat is $747 million.