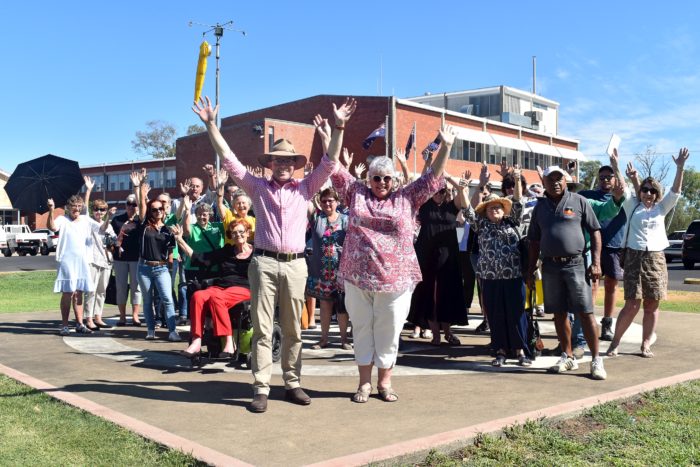 PEOPLE power still matters in politics, Northern Tablelands MP Adam Marshall declared today as he announced a commitment from the State Government of $80 million for a new hospital and health facilities at Moree.

Just five months after launching a grass roots campaign to petition the NSW government for the $80 million funding required for a new facility, Mr Marshall was once again joined by Moree Plains Shire Mayor Katrina Humphries and a large group of locals outside the existing hospital, this time to declare victory.

Mr Marshall commended the Moree and district community for the successful campaign, which saw more than 5,200 locals sign a petition, to deliver a new hospital.

“The strong and unequivocal backing of so many community members made the difference when I was lobbying the Minister for Health and Treasurer,” Mr Marshall said.

“I am beyond thrilled with this outcome, while I was confident going in to bat, it wasn’t a done deal until the force of community support hit the table – it’s a bloody cracking result thanks to this wonderful community. The victory belongs to the community. It is now Moree’s time to shine.

“We played a very strong hand and I was determined that the Moree community would have a modern and new hospital campus to look after them for decades to come.

“I’ve said it before – people power is a powerful and essential ingredient when it comes to political push on this scale.”

The current Moree hospital is past its use-by-date despite funding in recent years to keep it chugging along – $1.75 million to upgrade the operating theatres and $2 million for a renal dialysis unit, Mr Marshall said the time for applying band aids was over

“The Moree district and the wider region is blessed to have the expertise of wonderfully committed staff and this funding will deliver a suitably equipped facility to support their work,” Mr Marshall said.

“I look forward to joining the community watching the new hospital being built, as I have in Armidale and Inverell in recent years.

“This will be the single largest health project in the Northern Tablelands in living memory and the largest single project undertaken in Moree that anyone can recall.

Moree Plains Shire Mayor Katrina Humphries welcomed the funding commitment, saying it would be crucial for the community’s future.

“Moree deserves a new hospital, to maintain the services we have got, especially birthing, but also to help us attract new medicos and keep them here,” Cr Humphries said.

“This project will also be important in keeping the wheels of our economy and community turning.

“It’s great news for us and I want to thank Adam for going into bat for Moree so hard – it’s a wonderful result.”

Mr Marshall said if the government was returned at the 23 March election, planning work would begin on the new hospital.

“This is a will be a much larger and complicated project than both Armidale and Inverell Hospital redevelopments, so the planning will be crucial to ensuring we have a facility that will cater for the health needs of this area for many decades to come,” he said.

“It will involve the demolition of much of the old hospital and outer buildings and the construction of a brand new hospital on the same site.

Moree District Hospital is one of the busiest health facilities in the region. Last year there were 8,344 presentations to the Emergency Department, 1,000 operation procedures, 170 births and 3,762 admissions at the hospital.