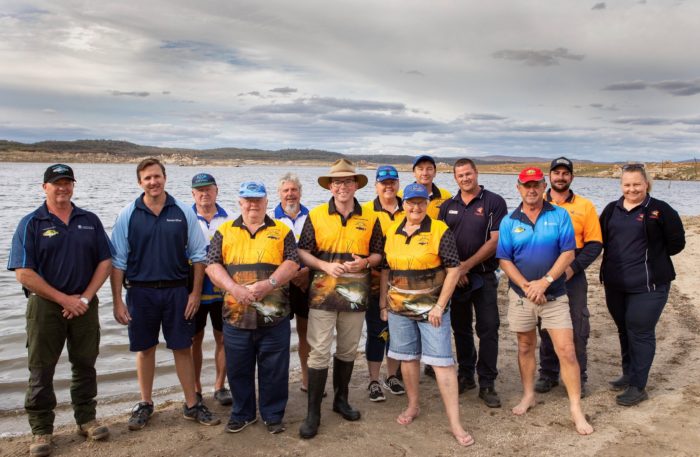 AROUND 30,000 Golden Perch fingerlings now have a new place to call home, after being released late yesterday into Copeton Dam, near Inverell, following an 830-kilometre journey from the Narrandera Fisheries Centre.

Minister for Agriculture and Member for Northern Tablelands Adam Marshall was on hand to help with the stocking event and said it was great news for the local community, which relies on Copeton Dam fishing for a range of social and economic benefits.

“Recreational fishers will be delighted with this influx of Golden Perch, especially as it follows a similar stocking event late last year when 45,000 Murray Cod were released into Copeton,” Mr Marshall said.

“Not only does recreational fishing provide a fun and healthy outdoor activity that can be enjoyed by all generations, it also brings a range of economic benefits to the local community.

“Since Copeton was opened to year-round Murray Cod fishing in 2014, Inverell and surrounding businesses have continued to experience an economic boost from more tourists visiting the region and more fishers purchasing tackle from local suppliers.

“This is a direct result of the government’s fish stocking program, as research shows more than 90 per cent of the Murray Cod in Copeton Dam are stocked fish.”

“The stocking program is based on extensive consultation with fishing clubs, community groups and considers the specific conditions of the waterways,” Mr Marshall said.

“Copeton is now at around 11.5 per cent of capacity, which is still a vast body of water for these new fingerlings to grow.

“These new fish will help maintain Copeton’s unrivalled reputation as one of the premier NSW inland fishing locations and keep the visitors coming and the dollars flowing into the local economy.”

The released fingerlings will take around two years to grow to a legal size.

In the past 12 months the NSW Department of Primary Industries Fisheries team has stocked more than 1.1 million native fish across our state, along with millions of trout.

“This work has been supported by funds from the NSW Recreational Fishing Trust, in a great example of how recreational fishing fees are re-invested back into the sector for the benefit of the whole community,” Mr Marshall said.