YETMAN HALL COOLER THAN EVER THANKS TO STATE CASH SPLASH 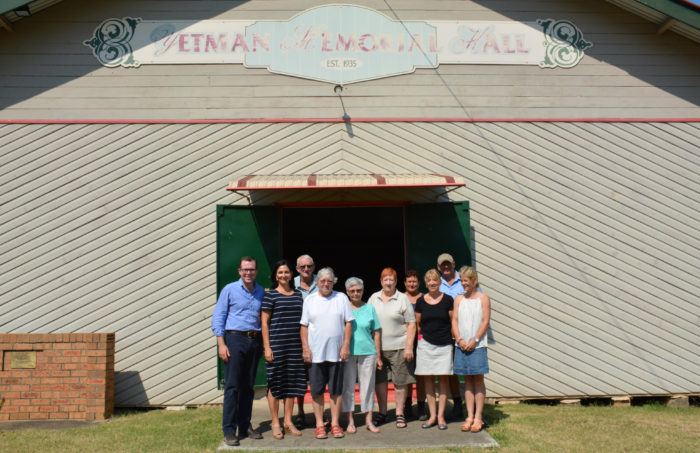 THE small town of Yetman has the heart of a city a hundred times its size – and at the centre of that is a whether it’s a raucous 21st birthday or tea for an 80th – it seems all social events end up at the Yetman War Memorial Hall.

Now it’s looking better than ever despite being over 80 years old, with $15,343 of newly completed safety and visual upgrades thanks to the NSW Government’s Community Building Partnerships fund.

The War Memorial Hall has had its ceilings and walls painted, with the floor sanded and polished. Member for Northern Tablelands Adam Marshall says the upgrades aren’t just a cosmetic touch-up.

“With the hall used by locals of all ages, good flooring ensures young children don’t get splinters and older folks can have stable footing,” Mr Marshall said.

“With the funding, Yetman banded together to paint the hall. That shows not only how much the war memorial hall means to the community, but also the passion that brings the small town together.”

The upgrades have gone hand in hand with Inverell Shire Council, who has assisted with fans and ceiling upgrades.

Yetman Hall and Progress Association president Kate Dight says the hall is a vital part of the community.

“The memorial hall really is the cornerstone of the township,” Mrs Dight said.

“The aged community use it at least once a week if not more, many different groups use it well and it’s patronised by the full community. People of all ages use it for the space and kitchen”

This year in particular, the facility will get a workout. Yetman Public School will celebrate 150 years – and ANZAC Day promises to draw large crowds to the town.

In 2015, the hall received a new shade awning and fence through Community Building Partnership funding.

Next on the committee’s radar is upgrading toilet facilities and providing some air-conditioning.