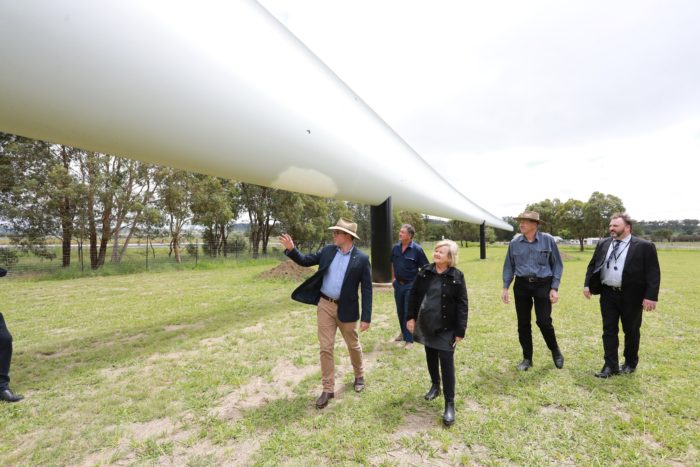 VISITORS to Glen Innes will soon be able to get up close and personal with one of White Rock Wind Farm’s mighty turbine blades, with Northern Tablelands MP Adam Marshall yesterday announcing an $87,986 State Government grant to build a viewing platform at the community blade on the Gwydir Highway.

Mr Marshall said the blade, located at the intersection of Dumaresq Street and Gwydir Highway, would become a permanent monument to Glen Innes’ commitment to renewable energy.

“Glen Innes is home to the largest windfarm in the southern hemisphere, and what better way to celebrate that achievement than by mounting a 60-metre turbine blade at the entrance to town, for all to see and appreciate,” Mr Marshall said.

“Council was offered the blade by White Rock Wind Farm in 2018 after it was damaged during construction and was unable to be used to produce power.

“Now it takes pride of place near the racecourse, with council to use this grant to create a family-friendly picnic area will also be established on site which will consist of viewing platform, seating and ample parking to allow visitors to call in and take a photo.

“From a distance the turbines are a site to behold, but it’s not until you get up close that people can really appreciate the absolute engineering marvel the wind farm truly is.”

Glen Innes Severn Mayor Carol Sparks said the park had been designed as a meeting place, which connects two communities with a shared interests.

“Glen Innes and Inverell have both benefited greatly from investments made in renewable energy,” Cr Sparks said.

“I think the land on the Gwydir Highway is the perfect spot for this turbine blade to be mounted as it will act as a directional tool, pointing travellers towards the wind farm and our neighbour, Inverell.

“While the development of local wind and solar farms has generated jobs, it has also created a new tourism opportunity for our area, with visitors often saying to me how they intentionally detour from their trip down the New England Highway, just so they can see the turbines.

“I want to personally thank Adam very much for his support of this project, which I see as one of the first stages in a greater strategy to expand our tourism market.”