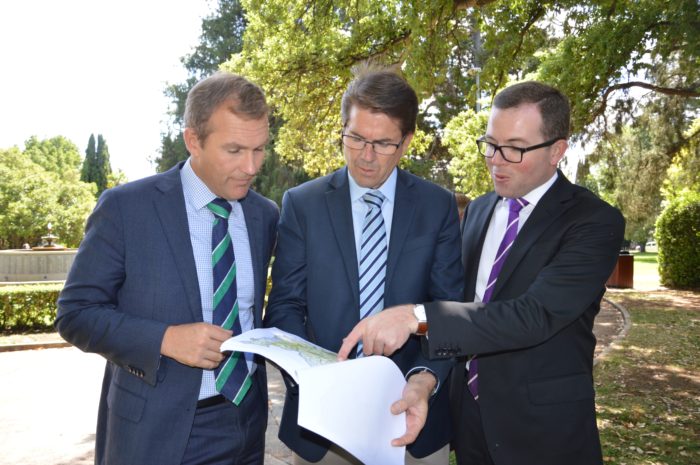 ARMIDALE will be officially recognised as a regional city for the first time, as part of a new 20-year vision for the New England North West region to grow the local economy, foster resilient communities and protect the natural environment.

The draft New England North West Regional Plan is the NSW Government’s blueprint for the region to 2036 and has been released today in Armidale by Planning Minister Rob Stokes.

The Parliamentary Secretary for Northern NSW Adam Marshall said the plan was a snapshot of where the region is now – and where it is going over the next 20 years – with a forecast growth in population of 14,000 more people in that time.

“This plan sets out a vision to grow the region’s strong local economy, and ensure its vibrant and sustainable communities flourish into the future,” Mr Stokes said.

“It’s vital that we make people’s lives better as our communities grow and change in years to come.”

He told a media launch in Armidale’s Central Park that the NENW was a strong and dynamic region and would play an important role in state growth.

Northern Tablelands Adam Marshall welcomed the draft plan saying it identified the challenges the two fastest regional cities, Armidale and Tamworth, had in meeting development aims but that they were the main economic drivers of a forecast 200,000 people across the region by 2036.

“The draft Regional Plan recognises Armidale’s importance as a population, transport and services hub for the region now and into the future,” Mr Marshall said.

“The region’s population is expected to increase by more than 13,000 people in the next 20 years, and this draft plan will ensure we have the jobs, homes and infrastructure we need.”

Both Armidale and Tamworth will be officially named regional cities, and are expected to be home to more than 50 per cent of the region’s population in the next two decades. Moree, Inverell, Gunnedah and Narrabri will be recognised as strategic centres, housing a further 28 per cent of residents in the same period.

Regional city and strategic centre designations highlight the key roles these centres will play in the region’s future and indicate the resources, infrastructure and public facilities required to ensure the region flourishes into the future.

Mr Marshall said infrastructure development was key to growth as was a more diversified regional economy and manufacturing, agriculture, mining and energy resources were seen as future drivers of investment in infrastructure, which would in turn drive jobs.

“There’s currently something like over $1Billion investment in the Glen Innes area in renewable energy,” Mr Marshall said.

“There’s 200 people employed in the White Rock wind farm construction phase and investment of over $5million with contractors. There will be 20 fulltime jobs in maintenance when it is completed and feeding into the grid.

“That’s a sign of the investment potential and economic development in the solar and wind energy industry we can support in the NENW.”

Members of the community can make submissions on the draft plan until 20 March 2017 and can provide feedback via an online survey and interactive map.

Once the exhibition closes, feedback will be assessed and will help inform the final New England North West Regional Plan.

A new inter-agency committee with representatives from local councils and NSW Government agencies will be established to drive the plan’s implementation.

The draft Plan, survey and interactive map can be viewed at www.planning.nsw.gov.au/newengland-northwest