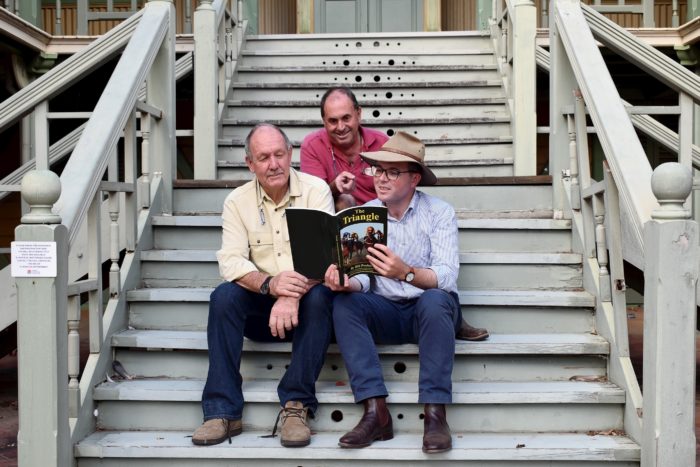 THE State Government has ‘laid down’ $5,000 for a good cause, backing the publishing costs of Moree and District Historical Society’s new fundraiser, The Triangle, a history of bush racing across Moree Plains district.

Proceeds from book sales will go directly towards the formation of a local historical museum in the former Crown Lands building in Frome Street.

Mr Marshall congratulated the Historical Society on its fundraising efforts.

“I have been working with the Moree and District Historical Society for nearly four years to make the old Crown Lands building its new permanent home,” Mr Marshall said.

“It’s a perfect reuse of this iconic building and this book is a wonderful way to chronicle the history and importance of country picnic races to the social fabric of the Moree district over more than a century-and-a-half.

“Since the mid 1800’s picnic racing has played a major role in bringing people together across the ‘Golden Triangle’.

“This book talks about those people, the horses and places that make up picnic racing in the North West and I urge everyone who loves the sport to get out and buy a copy.”

There are 100 limited edition hard-cover editions available, along with and 500 soft-covers, which will be sold at upcoming race meetings at Mallawa and Talmoi.

Mr Marshall said he was pleased to see the Historical Society forging ahead with its plans for a museum at the historic Lands Office.

“Through various considerable donations from community organisations across Moree Historical Society appears well on track to make the museum come true,” he said.

“It’s important Moree’s public records are maintained for future generations and the more money which is raised the greater the capacity local historians will have to do so.”